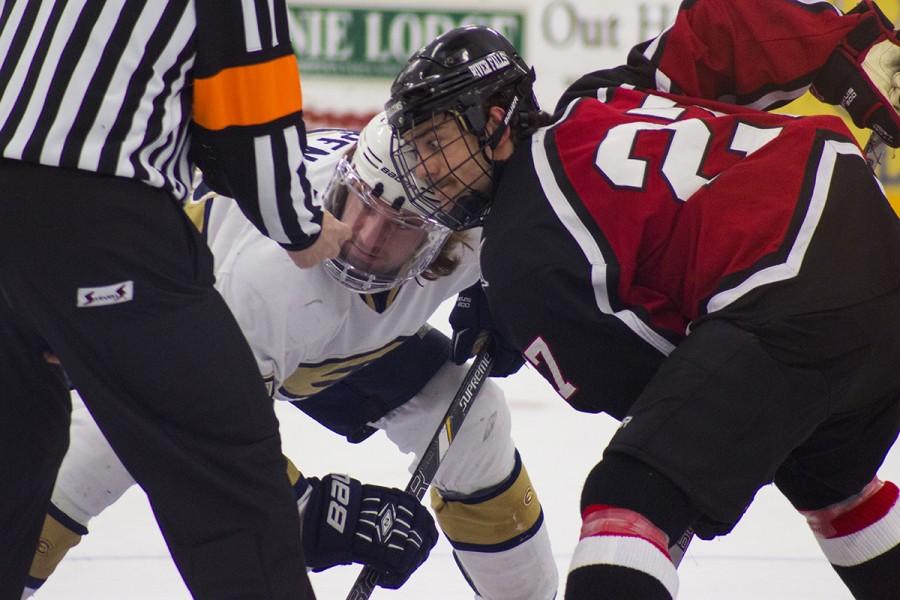 In a strong conference where every win is vital for a shot at the NCAA championship, conference wins become even more valuable. In the WIAC, two teams are nationally ranked and another is just outside of the top 15.

The No. 10 UW-Eau Claire men’s hockey team had two opportunities to better position itself in the hunt for hardware with conference matchups against UW-Stout last Thursday and UW-River Falls last Saturday.

Against the Blue Devils on the road, junior forward Adam Knochenmus had a career day in the 7-0 victory.

Knochenmus scored five goals in the first period, two in the second and another two in the third. Two of the five goals were on power-play opportunities.

Despite his record-setting day, Knochenmus said he didn’t think this was his best performance of all time.

“The puck was just finding me, my linemates were finding me and I was in the right spot,” Knochenmus said. “That one definitely ranks up there very high, I couldn’t pinpoint an exact game which would be my absolute best game.”

Nauman scored his first and only goal of the night on a power play about four and a half minutes later. Senior defenseman Joe Schmitz and sophomore forward Todd Koritzinsky assisted Nauman on the play.

Finally, with less than three minutes left in the game, Koritzinsky took one for the road as he blasted the puck into the net with help from junior forward Brandon Wahlin and freshman defenseman Tyler Hart.

Eau Claire will compete against Stout next at 7 p.m. Thursday, Jan. 28 at Hobbs Ice Center.

Head coach Matt Loen said the team capitalized on opportunities and fortunately, Knochenmus was in the right spots at the right times.

“He was all around the net,” Loen said. “and it seemed like everything he touched was going in.”

Senior goalie Tyler Green had 33 saves in the win.

The Blugolds were not able to bring that road-match momentum back to Hobbs Saturday when the Blugolds and the Falcons faced off for the first time this season.

River Falls scored first in the match with about four minutes left in the first period. The Falcons scored another goal about three minutes after the power-play goal.

The rest of the game went scoreless as the Falcons flew into to Hobbs and flew out with a 2-1 conference win. The Blugolds play the Falcons next at 7 p.m. Thursday, Jan. 21 at River Falls.

Loen said River Falls did a good job keeping the team on the perimeter and Eau Claire needed to take advantage of the few “good” chances it had. While the team has practiced to improve upon its strengths and make sure it’s playing how they want to play, Loen said the approach has been changed.

“We’ve got a skilled team here, but we’re finding that skill doesn’t win games,” Loen said. “We’ve gotta work harder and we’ve gotta go in those areas where no one wants to go which are in front of the net and the corners and we must win some one-on-one battles.”

He said after being “shut down” by River Falls, the Blugolds must add more physicality to their team’s identity.

This, Loen said, can be done by not only playing the kind of offensive game they want to, but by being more forceful on defense and throwing opponents’ games off.

“Not just being fast and skillful, but to add more grind to our game,” Loen said.