After going 1-1 over the past week, the Blugolds look to carry their successes into a three-game homestand. 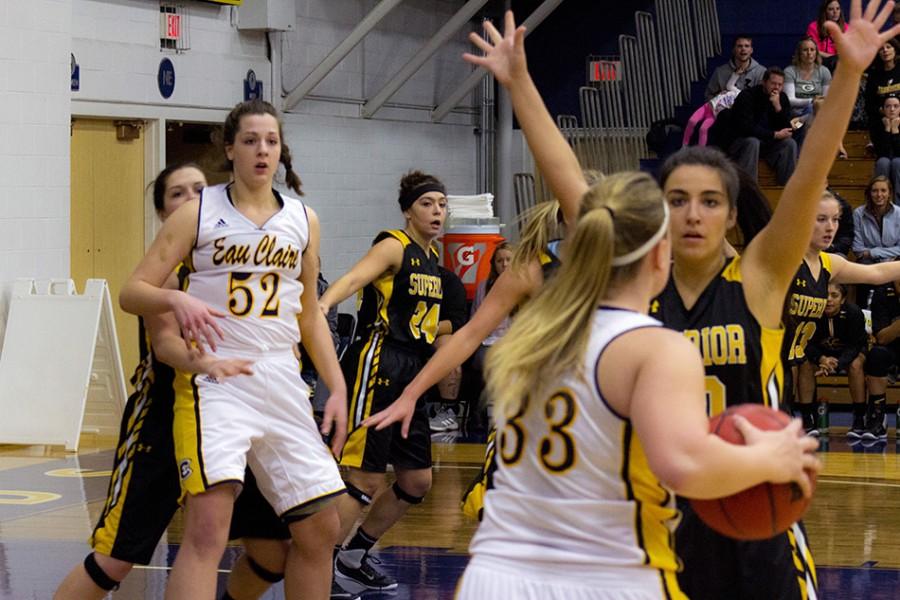 Junior Bree Meier looks to Sophomore center Erin O’Toole as she posts up in the paint against UW-Superior Saturday night in Zorn Arena.

As the UW-Eau Claire women’s basketball team prepared themselves for the season ahead, they had to adapt to changes within its system.

A change from two 20-minute halves to four 10-minute quarters, a new post presence transferring from an NCAA Division I program and the move of last year’s starting point guard off the ball to the two guard.

Although none of the changes negatively impacted the Blugolds in the off-season, they were changes that affected the style of the Blugolds’ game, head coach Tonja Englund said.

This, along with a top-20 strength of schedule, could be reason for panic for many programs. However, Englund said the Blugolds have weathered their tough slate of road games, which includes their 70-62 win over St. Norbert College Nov. 24 in Green Bay, which Englund said is one of the tougher places to play in NCAA Divison III basketball.

“I thought the St. Norbert win for us will be a very very quality win, some of my best teams have had trouble winning over there,” she said. “So that was a big game for us because St. Norbert returned everybody from last year when they went pretty deep into the NCAA tournament.”

Senior Teenie Lichtfuss led the way for the Blugolds in the win with a season high 24 points, and sophomore Erin O’Toole added 16 of her own in a game that the Blugolds were able to stick to their game plan in and close out, Englund said.

However, the excitement from the win didn’t last long as Eau Claire dropped their third game of the season Sunday to St. Mary’s University (Minn.) 73-68, in a game that Englund said once again they weren’t able to close out.

The Blugolds took a five-point lead into the fourth quarter, but were outscored by 10 points and relinquished their late lead to the Cardinals as Englund said the team didn’t continue to follow the game plan in the quarter.

“Defensively we need to clean things up, we’ve got to hold teams in the 60s and anytime we let a team into the 70s that’s a problems for us,” Englund said. “We had a nice lead against St. Mary’s and lost that lead in similar fashion to the Superior game.”

One of the biggest changes for the Blugolds this season has been with the guard positions. Last season’s leading scorer, Lichtfuss, was moved off the ball and to the two guard on the wing to provide more scoring.

Lichtfuss was able to provide what her coach had been looking for out of the move against St. Norbert, when she led the team with her 24 points.

Englund said for Lichtfuss, the move gives her less responsibility in not having to bring the ball up, so she can focus on getting her shot.

But there are times where she wants the ball in her hands more, so Lichtfuss will take over the reigns of bringing the ball up court for a few minutes at a time.

“In high school I was a two guard and I feel like I’m just more productive in that spot overall,” Lichtfuss said. “And we have Jenny LaCroix and Maddie Dunathan taking over the point guard spot for me and I feel confident in their play and ability to take some of the pressure off of me.”

The sophomore LaCroix and the freshman Dunathan have lead the Blugold offense in Englund’s small lineups this season she said, and simply give the Blugolds another dimension.

Englund said that the competition between the point guards throughout the season and in practice is extremely healthy and competitive, and the competition brings out the best in both players and the rest of the team.

The Blugolds were off this week but Lichtfuss said the break allowed them time to regroup and correct what was going wrong for the team over the past few games.

“We’ve been just focusing on stuff that we didn’t do well in the past two games and just taking it and breaking it all down,” Lichtfuss said. “So now hopefully when we get back to game time this weekend those things will be fixed.”