Blugolds knock off River Falls in first round of WIAC tournament 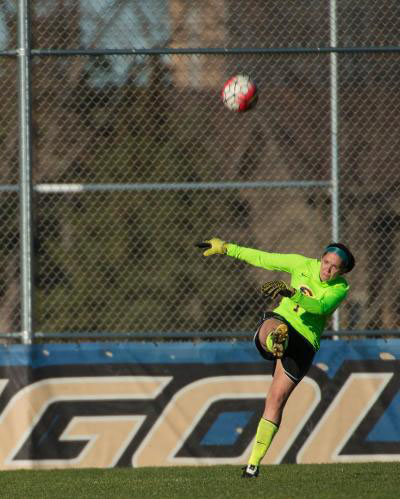 As the last second shot attempt stopped short, and the final horn sounded at Bollinger Field Tuesday afternoon, Blugold sophomore goalie Sammie Lefaive came cartwheeling out of the goal box and was mobbed by her teammates hugs.

Each and every teammate on the field was verbally thanked by Lefaive as they embraced on the field after UW-Eau Claire’s 2-1 win against UW-River falls in the opening round of the WIAC tournament.

Lefaive, who saved six shots on goal in the game, was the safety net behind freshmen defenders Ava Charlesworth-Seiler and Brenna Sullivan, as she made three big saves late in the second half.

Not only did Lefaive make plays in goal, but she also kept her team relaxed when they would begin to press defensively by yelling to her defenders, helping them communicate with one another she said.

“It’s important that we always maintain our composure,” Lefaive said. “Staying relaxed and taking the step back instead of always attacking can be important for us at times.”

Lefaive said Saturday’s senior day win against UW-Platteville to get the team back on the winning side of things gave them a confidence boost for the Falcons matchup.

“Saturday’s win was a huge momentum boost for our team,” she said. “We changed the lineup for that game and had success, so coming into todays game knowing that the lineup had already had success gave us a confidence boost for sure.”

Nearly 15 minutes later, after continuing to push the ball forward, the Blugolds were rewarded with what head coach Sean Yengo said was a beautiful goal off the foot of freshman Madeline Haworth after an assist from Seymour.

Yengo said it was nice to see Haworth get rewarded with a goal, as the coaching staff has worked with her on her aggressiveness since she was recently put into the lineup.

Although the Falcons were able to respond nearly five minutes later with a goal, the Blugolds locked down defensively and were able to control the ball to run the clock out.

“We had a slow start to the second half, but we had a strong finish and I thought we really settled it down,” Yengo said. “We just couldn’t get that next goal, unfortunately, to put the game out of reach, but I thought we played well and we’re excited to play another day.”

The Blugolds now move on to the WIAC semifinals at 6 p.m. Thursday against UW-Oshkosh in Oshkosh. Eau Claire fell to the Titans 3-0 on Oct. 24.

Yengo said that with the quick turnaround for their next game on Thursday, the Blugolds will look to rest up more than anything.

“That’s the thing, with us winning on Tuesday and right away having a game on Thursday, we need rest,” Yengo said. “We probably won’t do much of anything Wednesday other than watch game film, and just mentally prepare ourselves for the next challenge.”