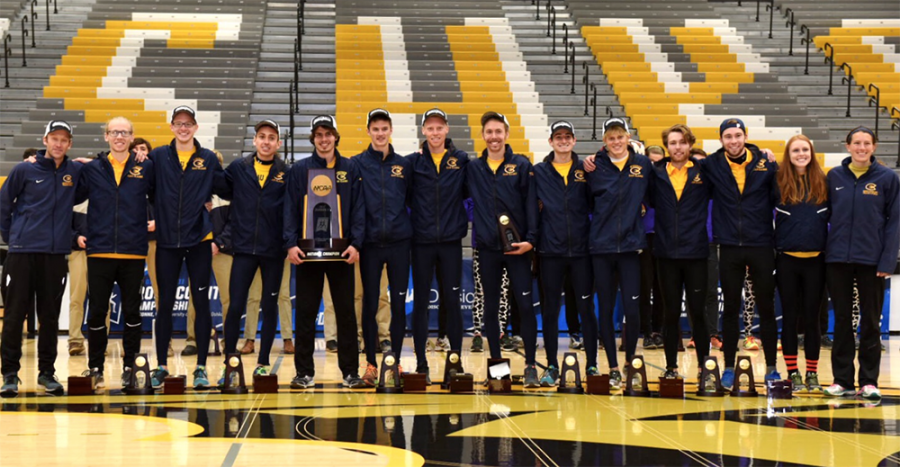 The national meet, held at UW-Oshkosh’s Lake Breeze Golf Course, was the third time this season the men’s team have run the course. Head coach Dan Schwamberger said familiarity of the course is advantageous to his runners.

“It makes things easier to visualize,” he said. “And the more you know a course, the better you’ll race.”

After winning regionals, the Blugolds were ranked No. 1 nationally. Schwamberger said prior to the meet, he doesn’t like to pay attention to the rankings, because his runners can only control how they do; they can’t control how other teams run.

“The way I try to go about it is I try to focus on things within our control,” he said. “We try to keep our preparation similar to what we’ve done all season.”

The preparation seemingly paid off, as three Blugolds earned All-American honors Saturday. The All-American status is awarded to the top 35 runners at the national meet.

Josh Thorson led the pack for the Blugolds, finishing runner-up with a time of 24:15 in the 8k race. UW-Platteville’s Ian LaMere beat out Thorson, crossing the finish line at 23:36.

Schwamberger said Thorson knew he would be running against LaMere, so his strategy was to initially set himself apart from the top pack of runners. After a little bit into the race, Schwamberger said it was up to Thorson if he wanted to compete with LaMere, or to hang back and see what happens.

Following Thorson, the next two Blugolds to cross the finish line were senior Ryan Mugan and sophomore Darin Lau, with times of 24:36 and 24:42, respectively. Mugan came in 11th place, Lau finished 14th.

Mugan became the first Blugold in history to earn three All-American accolades during his tenure at Eau Claire.

The final two men who contributed to the overall score was senior Christian Leitner and junior Nick Petersson. The two Blugolds came in 38th and 112th, respectively.

Prior to the race, Schwamberger said the team kept the atmosphere “light,” which helped keep things under control.

“(The men) came in knowing they were ranked No. 1,” he said. “I was impressed with how they handled it. They didn’t seem really intense. They were really relaxed.”

As per usual, Lucy Ramquist was the front-runner for the Blugolds. The senior capped off her career finishing eighth overall, touring the 6k course with a time of 21:33.

Ramquist earned All-American honors and placed in the top 10, two things she hasn’t done before.

“It was such a good way to end my running career,” Ramquist said.

About two-thirds into the race, Ramquist took a fall, setting her back in the race. With a mile left, she cracked the top 20.

Schwamberger said he knew the fall set her back a little but was still proud of her finish.

“I don’t think she lost a lot of time when she fell,” he said, “but she had an incredible last 1200 meters with a really quick close. That was really impressive.”

Clara Williams was the second Blugold to cross the line, placing 72nd with a time of 22:10. Last year, Williams placed 104th at nationals.

“We focus on trying to start off under control and maintain position in the race,” he said. “And (Fischer) did a really good job of that.”

At the beginning of each season, Schwamberger said both teams set an overall goal. This year, each team wanted to improve upon their placements at nationals last year, which they did.

While Schwamberger said he was proud of both teams for their performances in Oshkosh, the main thing, he said, was everyone had a lot of fun this year.

“We had a really good group this year,” Schwamberger said. “It’s hard to believe the season’s already finished.”