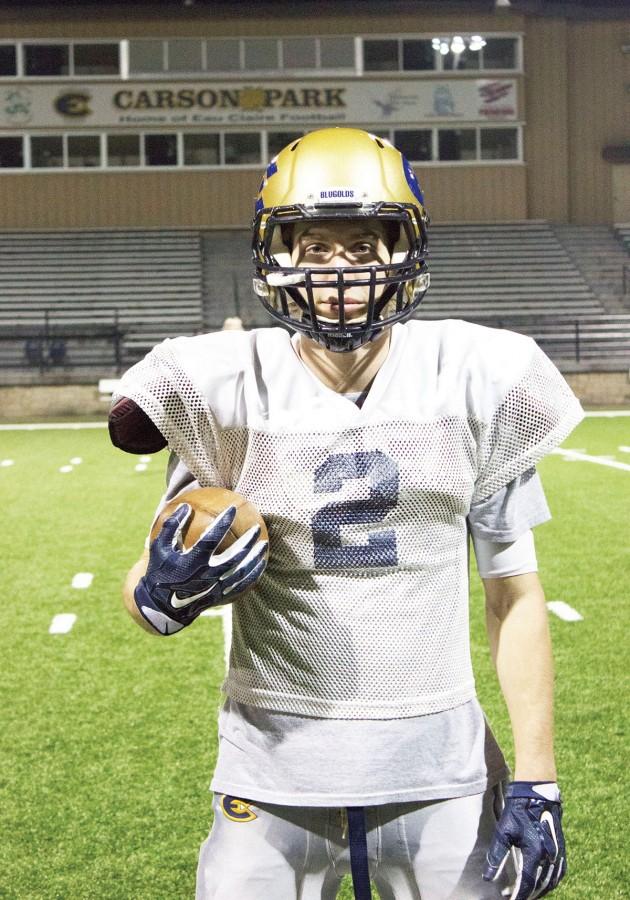 When then-senior quarterback Matthew Knapp walked off the field following a 49-35 home playoff loss against D.C. Everest Senior High School in 2011, he wasn’t sure if he’d play at Carson Park again.

Four years and two position changes later, the now-junior wide receiver leads the WIAC with 1,277 all-purpose yards and has become the go-to guy for the Blugolds offense.

Knapp’s high-level play earned him looks from NCAA Division II and III schools around the region.

UW-Eau Claire didn’t have to look too long to find a talented athlete right in it’s front yard.

However, Knapp decided to take his talents Northwest. As in, 310 miles Northwest to NCAA II Bemidji State University (Minn.).

As a freshman Beaver, Knapp played quarterback but didn’t get to play on the field. In the classroom, he wasn’t sure what he wanted to pursue. This led to his homecoming.

“I never thought that I’d come back to Eau Claire,” Knapp said. “Leaving Eau Claire for a full year and being five, six hours away… it just seemed like a good option for me. I didn’t really fit in up there.”

He said he had different transfer options but decided on Eau Claire’s high-level education he could receive. He had one fan in particular who was happy with his transfer decision.

“He’s dedicated and I’m so proud of him,” Diane Knapp, Matthew’s mother, said. “We encourage our kids to be independent and take responsibility for themselves. He goes all in on everything that he does.”

Matthew Knapp said after he arrived to Eau Claire, starting over and trying to make new friends was tough. He had friends from high school that stayed in town for their greater learning, but he said he was careful not to “step on any toes” as the incoming transfer athlete.

“He’s a heck of an athlete,” senior quarterback Joel Newman said. “We’re lucky that he decided to transfer back home. He’s the kind of guy who’s way too athletic to not be on the field, so they moved him to wide receiver and he was a high-impact player right away.”

Matthew Knapp said the transition to wide receiver had its fair share of difficulties, but it’s turned him into a more productive player.

He said the adjustment to route running was tough but because of his experience playing quarterback, he knew where the quarterback would want him to be and that made the overall process easier.

Newman said Matthew Knapp’s background as a quarterback is noticeable and it has helped him thrive as a receiver.

“He’s a very smart player,” Newman said. “He knew the playbook right away. Look at the things he can on special teams. He’s a big playmaker for us.”

Matthew Knapp has 1,277 total all-purpose yards this season, and 711 yards have been earned on special teams. Specifically, 673 yards are from returning kicks. While Matthew Knapp’s kick return opportunities usually came because the opponent had scored, he has still produced the yards.

Glaser said Matthew Knapp is a player others can look up to.

“He has a great work ethic,” Glaser said. “Despite our poor record, he makes plays, he’s very durable and he’s a great guy to coach.”

Above all else, the former First Team All-Region high school quarterback said he works everyday to get better. He classified this season as “alright” and said he wants more moving forward.

“Everyone wants to do more than they are doing,” Matthew Knapp said. “There’s always plays, in the back of your mind, where you wish you would’ve cut one way instead of the other. You’ve got to push those plays back and move on.”

Diane Knapp said she admires her son’s dedication and love for the game.

“Every parent wants their child to do their best,” Diane Knapp said. “I can unequivocally say he is giving it all he’s got.”