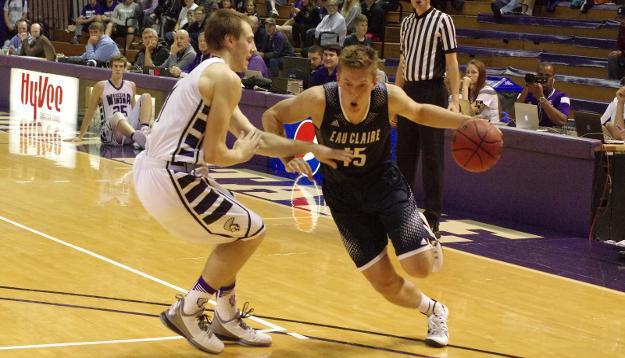 Near the end of October it seemed as if everything was coming together for the UW-Eau Claire men’s basketball team to begin a season led by head coach Matt Siverling on a healthy note.

But just as the calendar month changed, the injury bug bit and junior guard Adam Hjelter was sidelined for at least the first month of the season.

Eau Claire reached the WIAC semifinals last season without Hjelter, and were prepared to begin the year without him.

“I don’t know really the timetable on (Kalien and Hjelter),” Siverling said. “We are expecting them both back this year. It’s just a matter of when.”

Missing both of its leading scorers from the past two seasons, Eau Claire traveled to Waukesha last weekend to participate in the Johnson Bank Tip-off Tournament at Carroll University.

The Blugolds split the weekend competition going 1-1, picking up their first season win against Luther College 79-65 but falling to Carroll the following night, 65-59.

Siverling said capturing the first win of the year was important for the team’s confidence after losing to No. 4 University of St. Thomas (Minn.), but sloppy ball control cost them the chance to tie together a two-game win streak.

“Turnovers really hurt us (against Carroll),” Siverling said. “But the bottomline is we gotta be able to defend at a higher level and that is something we will continue to work on.”

After three games, junior Jack Martinek leads the Blugolds in scoring, averaging 14.3 points per game. His efforts over the weekend earned him a spot on the Johnson Bank Tip-off All-Tournament team.