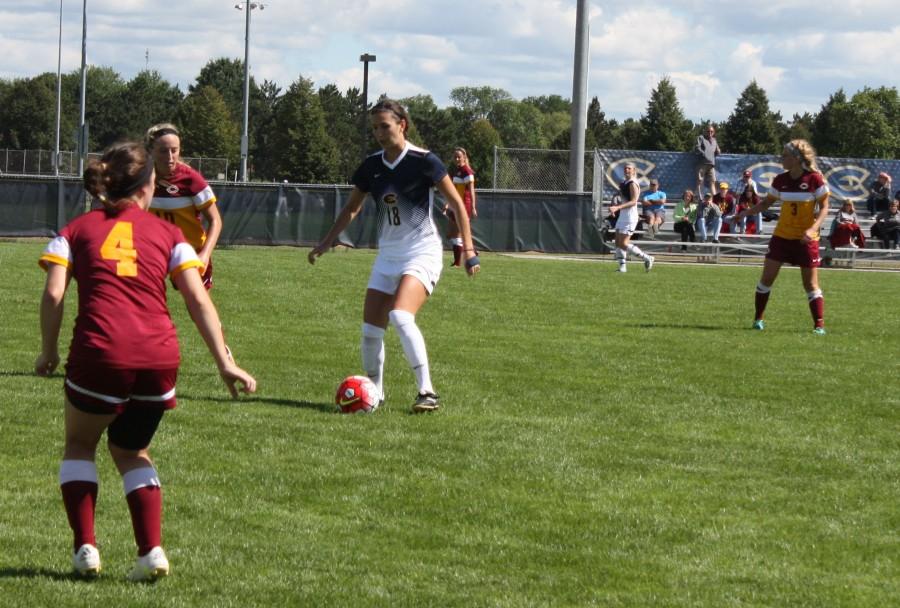 All season long, women’s soccer head coach Sean Yengo has stressed to his team that anyone can beat anyone on any given day in this year’s conference.

This theme has been an important one for the Blugolds throughout conference play, but will only become more important as the Blugolds face winless conference opponent UW-Platteville in their conference finale Saturday, and as they begin play in the WIAC tournament next week.

Despite coming into this past weekend’s game against UW-Oshkosh with this mentality, the UW-Eau Claire women’s soccer team couldn’t overcome a sluggish start on defense to steal what would have been a big road win as they fell 3-0, Yengo said.

The Blugolds got behind early when just 9:45 into the game the Titans were able to score off one of five corner kick opportunities.

After the goal the Blugolds were able to settle down on both sides of the ball and began to get some offensive possession. However, that didn’t lead to any scoring plays.

Although Yengo said the Blugolds were able to respond with more possession late in the first half, the second half was a different story as Oshkosh was able to put Eau Claire away with two goals early in the half.

Yengo said the game on Saturday was one of the weaker performances from the Blugolds all season and a lot of factors played into the struggles.

“It actually was probably one of our weaker performances of the year and a lot of factors played into that unfortunately,” he said. “It was the first time we had played on turf all year and the conditions were horrendous; this on top of us not playing to our potential is what set us back.”

Despite the setback against the Titans, Yengo said the team has to put the loss behind them and continue to believe in their ability to win close soccer games.

This starts with Saturday’s game against Platteville, as Yengo said their game plan looking ahead is to win three games, Saturday’s senior day match and their matchups with whoever they may draw in the WIAC tournament.

“This upcoming game is a big momentum game for us as we need to get back to playing our style,” Yengo said. “It really just comes down to us being able to win the 1-0 game that we have struggled to win this year, and I think if we can just do the little things right we can do that.”

At 2 p.m. Saturday the Blugolds will face the Pioneers at Bollinger Field on Senior day to end regular season play. After the game, conference tournament seeding will determine the Blugolds opponent for the first round of the WIAC tournament on Nov. 3.