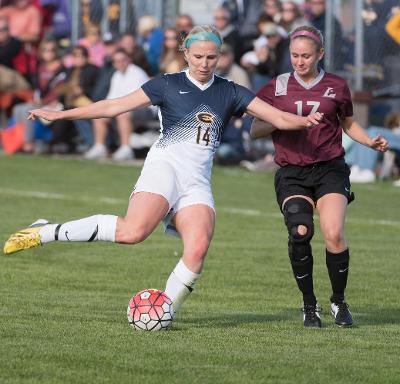 On a day when the UW-Eau Claire women’s soccer team’s first conference championship in 2005 was remembered with a halftime celebration, the undefeated Blugolds took to Bollinger field with high hopes in continuing their quest toward one of their own.

However, the Blugolds hit a roadblock when they met fellow undefeated conference opponent UW-La Crosse Saturday afternoon, dropping a cold and windy defensive battle 1-0 to the Eagles.

Coming into play Saturday, the Blugolds hadn’t lost a match since Sept. 16 and were riding a two-game winning streak. However, the Eagles (9-3, 3-0) were riding a four-match win streak and were able to shut the Blugolds out with their strong defensive play, head coach Sean Yengo said.

La Crosse got on the board early only 25 minutes in, when the Eagles’ Alex Cording beat senior defender Megan Hanson around the right side of the field after her missed slide tackle, and fed a pass into the box to a wide-open Cassie Handrick who did the rest, sinking the ball into the back of the net.

Although the Eagles were only able to put four shots on goal, compared to the Blugolds six, time of possession was dominated throughout by La Crosse allowing them to keep the ball out of their territory.

Yengo said overall it was a defensive game so the team needed to take advantage of the few offensive opportunities they got, but weren’t able to in the end.

“When you get your chances offensively you have got to be composed in those moments,” he said. “It felt like we did get into the attacking third and did create chances, but in doing so we kind of panicked a bit and didn’t capitalize.”

The Blugolds came out in the second half attacking the La Crosse defense, and looking to catch them sleeping.

Although Eau Claire was able to get some good looks off of corner kicks and a free kick from senior Tara Dennehy just outside of the goal box, the Blugolds continued to miss the extra pass Yengo said.

“A lot of it is just being patient,” he said. “La Crosse in the second half was dropping off and moving back so the through ball wasn’t there for us, so in this position we need to realize that we need to make the defense come to us instead of continuing to look for the same thing.”

Senior Ashley Seymour said despite the loss and offensive struggles, the biggest takeaway from the game is the consistency factor.

“I think it’s important to remind our team that we need to be consistent,” she said. “It’s not good enough to show up and want to win and work our hardest just sometimes; it has to be all the time in order to be more successful.”

Even with the tough game offensively for the Blugolds, Yengo said a bright side to the loss was Hanson’s return from injury after missing the first two months of the season due to a knee surgery, which will bring back much needed leadership.

At 1 p.m. Saturday the Blugolds will look to bounce back in conference against last years’ conference runners up as they travel to face UW-Whitewater.