Building from the mat up

After yet another coaching change, Blugold wrestling hopes to find stability 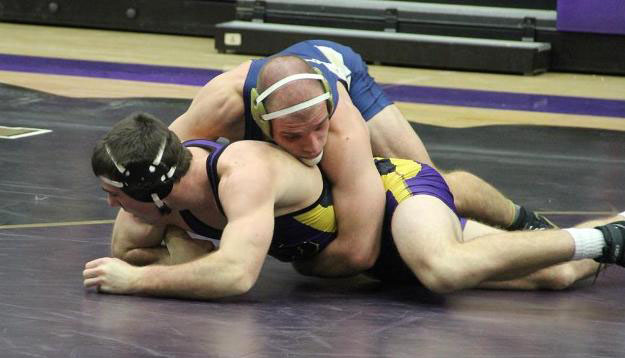 A scenario usually only found in the revolving door of youth athletics is the reality of the UW-Eau Claire wrestling team since Blugold hall of famer Don Parker retired in 2009.

The new man at the helm for Eau Claire this year is Tim Fader, who replaced Jared Evans from last year.

A program that is in desperate need for stability may have finally found their man as Fader is a former National Wrestling Coaches Association Coach of the Year, winning in 2001 and 2012.

He is also a four-time WIAC coach of the year for UW-Whitewater, serving as head coach from 2004-2014.

Prior to coaching the Warhawks, Fader was the head coach at UW-La Crosse, and his teams finished inside the top-20 of the NCAA tournament and won conference each year he was there.

Senior Nathaniel Behnke said although starting the past four years with a new head coach is difficult, he is eager and convinced Fader is the guy to finally bring stability to the Blugold wrestling program.

“(Fader) really knows how to build a program up,” Behnke said. “He is pushing us to our limits in practice, and I am excited to see where he takes us as a team.”

Over the past three years, the quantity of wrestlers on their roster, not quality has been one of Eau Claire’s biggest detriments as the Blugolds regularly surrender matches in certain weight classes because they have no one to compete at that weight.

Fader said the days of surrendering matches is over and the quality of wrestling that has seen men like Behnke, Justin Karkula and former Blugold wrestler now assistant Mat Rieckhoff reach nationals is slowly matching the quantity.

But Fader didn’t build La Crosse and Whitewater’s wrestling programs over night and he said time is a valuable commodity when building a team because with time comes resources necessary to build with.

All these resources Fader said, are ones he plans to heavily pursue in the coming years.

“The sport doesn’t change. It’s been the same sport for a really long time,” Fader said. “That isn’t the part I’m worried about. I know I can teach wrestling skills and preparing guys to wrestle… We have to create the foundation here again.”

Fader is confident in his ability to coach and his resume backs him up,  but every program needs a bedrock.

After meeting with Director of Athletics Dan Schumacher, Fader said he became confident  that the time to start building up the wrestling program is now.

“This program just needs some energy and resources, and I think I can do that,” Fader said. “I think next year at this time we’ll be a stronger program and the year after that even stronger.”

The building plans start now though, and two weeks into season practices, Behnke said the rest of the Blugolds are eager to be the new foundation of Eau Claire wrestling.

The Blugolds compete at 9 a.m. Sunday in the Yellow Jackets Open at Rochester Community and Technical College (Minn.).