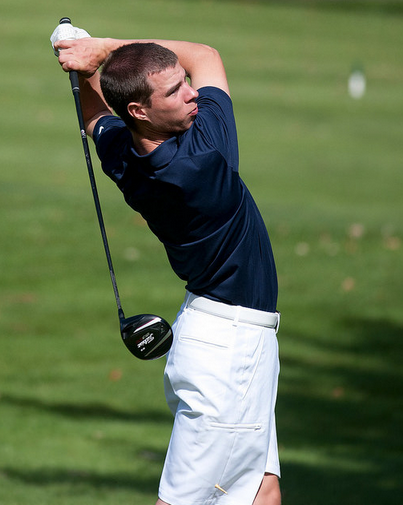 Coaching two teams at two different but equally important times in their respective seasons is a challenge. This is what Mike Greer signed up for last year when he agreed to join the women’s coaching staff after three years of coaching the men.

Greer said he credits his assistant coaches who make his job easier and help cover for him when he can’t be two places at once. As a former Blugold golfer himself, Greer takes pride in giving back to a new generation of UW-Eau Claire golfers.

This held true this past weekend as both the men’s and women’s teams needed the help of their responsibility -juggling leader when the men traveled to Florida for competition, and the women competed in the WIAC Championships.

On the line for the women was not only a conference title, a feat they haven’t reached since 2013, but an automatic bid to the NCAA Division III Championship.

Despite junior Katie Moore finishing fourth, and Greer forgoing a flight to Florida, the women failed to steal the top spot from UW-Oshkosh, finishing second with a team score of 1039.

Oshkosh won by 47 strokes with a score of 992. Greer said the Titans are an elite team this year filled with talent, but the Blugolds youth took steps in the right direction playing against such skilled competition.

“Taking second at conference, I don’t think we can walk away hanging our heads,” Greer said. “I don’t think we played as well as we’re capable of but at the same time you have to hand it to Oshkosh.”

The Titans finished with the top- two individual golfers, but falling two spots behind them was Moore who said though the WIAC Championships didn’t end they way they’d envisioned, Eau Claire’s young roster is set to make a leap next year at conference, and that process will start in the spring season.

Moore and the Blugolds will be off until February, when organized team activities are scheduled to begin.

Though Eau Claire can still earn an at large bid to the national tournament, it is far more likely its best chance at capturing the national spotlight will come next year at this time.

A time when the Blugolds will have even more collegiate golf matches under their belt.

“Hopefully next year we can take that extra experience and turn it into a first place finish,” Moore said.

When it comes to roster construction, the men’s team is a near spitting image of the women.

Their two top scores are juniors, and underneath both Brady Hanson and Joey Dreier are several freshman and sophomores who are still getting adjusted to the college athletic scene.

In fact, Eau Claire brought two sophomores and one freshman alongside Hanson and Dreier to Florida for the Golfweek Fall Invitational.

Dreier said after a strong first round, they struggled to shoot consistent scores outside of Hanson who finished tied for 25th.

“We were in good shape after day one and tied for fifth place,” Dreier said. “But in day two a lot of us struggled and out there it can be tough to come back from those days and we weren’t happy with how we played on the second and third days.”

Finishing with a final score of 896, the Blugolds tied for 14th and Dreier said though their finish put a sour taste in his mouth, he is excited for a spring season where the competition will be just as tough as the teams they saw in Florida.

Greer said though he wishes he could’ve been in Florida and at the WIAC Championships at the same time, both his teams are close to taking the next leap to join the top golfing programs in NCAA III.

“We are looking forward to some time away from the game to reflect a bit on the season,” Greer said. “And to get that fire in our bellies again to get ready for the spring and to make a run.”