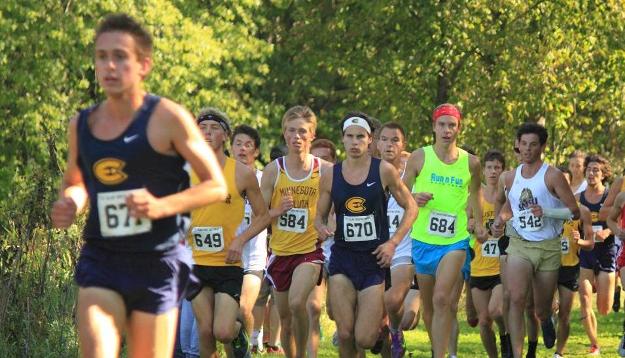 Although the Blugold cross country team, competing at the St. Olaf Invitational Saturday, didn’t improve on their final rankings from the year prior, many athletes shaved seconds off of their times from the same meet in 2014.

Senior Lucy Ramquist led the way for the Blugold women’s team, placing second overall with a time of 22:13 in the 6k race. Head coach Dan Schwamberger said the senior beat her time from the same meet a year prior by 74 seconds. Senior Clara Williamson also saw an improvement by 45 seconds from her last run at St. Olaf with a time of 23:04.

On the men’s side, senior Christian Leitner placed second overall with a time of 25:23 in the 8k race, 53 seconds faster than in 2014. Senior Ryan Mugan placed fourth with a time of 25:38, a 19 second improvement.

Out of 20 teams for both races, the women’s and men’s team placed fourth and second, respectively.

Although the regular season is now underway, Schwamberger said everyone’s training is specifically tailored to the end of the season where it “really counts.” The head coach said the meets that really start to matter are the conference meet, followed by the regional meet and, finally, the national meet.

“We won’t transition into specific plans until late October,” he said. “Our training is geared toward November.”

For now, the head coach said the biggest thing his athletes can do is to “stay smart,” and not get caught up in the results and rankings. Currently, the men’s team is ranked No. 4, the women are ranked No. 19.

However, the head coach said anything could happen between now and the end of the season, especially if the runners stay healthy. Distance runners go through a lot of injuries throughout their running tenure, and Schwamberger said the best thing they can do is to learn from them.

“For right now, we have been pretty fortunate that pretty much everyone is running, which is really good,” he said. “We try to be really proactive as far as injury prevention goes.”

Leitner said it’s the men’s goal to crack into the top four at nationals, if not win the entire meet. The senior said the only control anyone has this early is to stick to the process.

“Listen to what (Schwamberger) says,” Leitner said. “(He’s) a great coach and we’ve got a great program here. If you do the little things and put in the training, then good things will happen.”