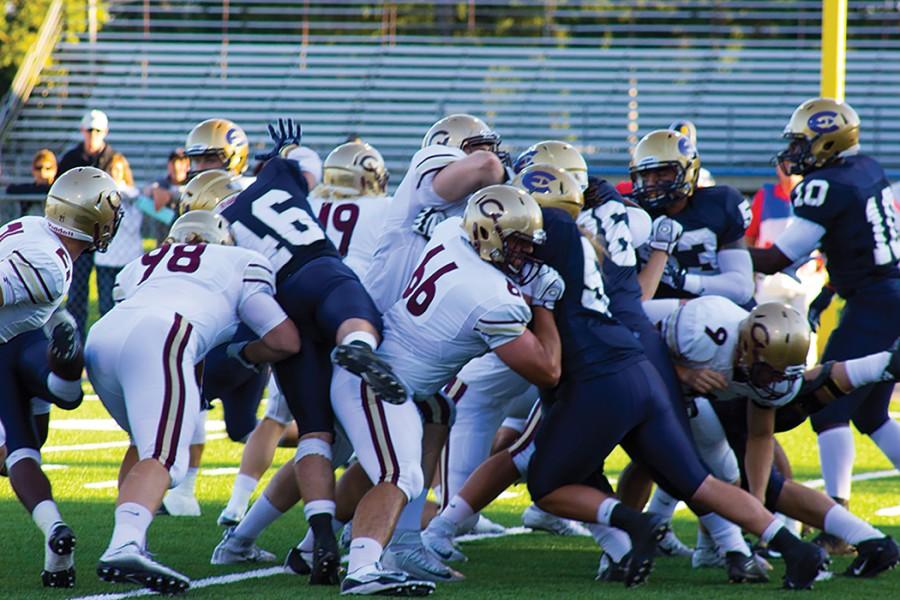 Senior Matthew Knapp thought the UW-Eau Claire football team would have a better shot at moving the ball against Concordia College-Moorhead (Minn.) last week than they did in the season opener against University of St.Thomas (Minn.).

He was right, as Eau Claire had 62 more yards of total offense than the week before. But the Cobbers’ offense gained nearly 50 more yards than the Tommies offense (471) en route to a 41-7 victory Saturday.

Knapp said he felt the final score didn’t accurately reflect the competitiveness of the game.

“The way we were able to move the ball up and down the field into the red zone multiple times made it seem competitive,” Knapp said. “I feel like we matched up well athletically, and once we get everything to start clicking and we all get better chemistry together it could be special.”

Better chemistry might be what the team needed as the Blugolds’ offensive drives continued to stall in the red zone and the team had 13 penalties for 98 yards.

Head coach Todd Glaser said the team looked better than in the season opener a week earlier, but the team must cut out penalties if they expect to be competitive this season.

“We really hurt ourselves with some penalties and turnovers throughout the game,” Knapp said. “We need to be able to capitalize in the red zone if we want to be competitive in this league.”

Both quarterbacks struggled with turnovers against the Cobbers Saturday.

Freshman JT Denhartog threw two interceptions and no touchdowns while completing 19-31 pass attempts. And when the offense replaced Denhartog with senior Joel Newman to give Concordia-Moorhead’s defense a new look, he completed 1-4 passes and threw a pick himself.

Even with offensive lineman senior Isiah Cage returning to the starting lineup, he had a personal foul penalty that pushed the offense back 15 yards.

Knapp said he felt good before the game about the position the team was in. He knew they would be able to move the ball against Concordia-Moorhead’s defense, he said.

The Cobbers may have been thinking the same thing about the Blugold defense entering the game.

Concordia-Moorhead earned more than 250 yards passing and rushing in the game for 514 yards of total offense, including 41 rush attempts for an average 6.1 yards per carry.

Knapp snagged his game-best 40-yard reception on a play he said was a good call against the defense.

“It took a little bit to develop,” Knapp said. “… but (Denhartog) stood strong in the pocket and made a nice throw to me on a cross route. Then my receivers downfield helped me out by continuing to block.”

Knapp’s preseason goal of making the playoffs is beginning to appear more and more bleak after losing the first two games by a combined score of 103-14. However, WIAC games will determine which team wins the conference and earns a title bid. The Blugolds start conference play on Oct. 3.

Eau Claire will face off against Wheaton College (Ill.) at 6 p.m. Saturday at Carson Park. This will be the last home game until Oct. 10.