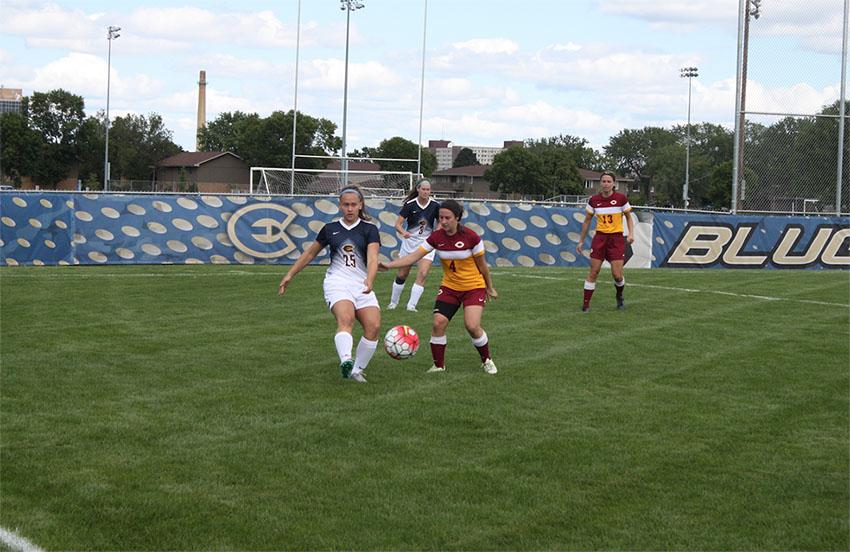 Sophomore midfielder Lauren Lenz passes the ball to a teammate in the second half of an overtime loss to Concorida-Moorhead (Minn.) Saturday afternoon.

The scoreboard read 2-1 at Bollinger field as Concordia College-Moorhead (Minn.) women’s soccer team’s reserves jumped off the bench and dodged a heartbroken UW-Eau Claire team to celebrate with the starters after the late game-winning goal in overtime.

Eau Claire walked off the field to the sideline after shaking hands, physically and emotionally drained after letting their second-half comeback effort go to waste.

The Blugolds fell behind within the first ten minutes of the game as the Cobbers dominated possession, keeping the ball on the Blugolds defensive end, scoring off of a corner kick that led to an open shot which juniorMoly Pignato buried in the upper left hand corner of the net,

However, despite the Cobbers continuing their control of possession throughout the first half, the Blugold defense locked down and made it to halftime only down a goal. The Blugolds did this despite missing two defensive starters in senior captains Ashley O’Connell and Megan Hanson, who were out with injury.

Head coach Sean Yengo said it’s tough losing two defensive starters like O’Connell and Hanson and having to replace the leadership with youth, but it is something the team will have to work through.

“Ashley O’Connell and Megan Hanson are two leaders that normally would play center back for us, but with their injuries we have two freshman back their filling in,” he said. “We definitely are going to make mistakes like we did today, but simply what will miss the most is their leadership.”

As the Blugolds took to the field to begin the second half, the ball began to roll their way and the offense started to click as they got two shots on goal within the first few minutes. One was a line-drive off of the foot of senior Tara Dennehy that ricochet off of the top bar.

However, the shot by Dennehy created opportunity shortly after, as the Blugolds kept possession of the ball with passing in the midfield allowing a cross-field pass from Dennehy to senior Caroline Henderson in stride sprinting up the field.

Henderson gained possession, and quickly turned firing a shot into the back of the net to equalize with the Cobbers.

Yengo said that in order to continue finding the net consistently, the group needs to play as a whole and build off of the defense.

“We just have to play together up top more often,” he said. “Today I just felt it was too much just individuals instead of working as a group and a team to score.”

Despite the Blugolds fighting back to tie in the 60th minute, and a strong effort by replacement defenders in freshman Eva Charlesworth-Seiler and Brenna Sullivan to bring the game to overtime, the Cobbers offense prevailed.

With 30 seconds remaining in the first overtime period, the Cobbers kicked the ball into Blugold territory off of a set piece. Pass by pass they worked the ball into the goal-box, and after multiple deflections the Cobbers’ Alison Enno put away the game winning goal.

Yengo said he points to the mental errors as to what set the Blugolds back in the loss, and said they are something that needs to improve as conference play looms in the distance.

“To be honest it’s the mental errors that hurt us, the two goals we gave up were really mental mistakes more than the physical,” he said. “We just have to take control of the situation as you can’t have any mental lapses in a game, you have to play every second like it’s your last.”

The Blugolds will play at 7 p.m. Wednesday at Luther College (Iowa) for their last tune-up before conference play begins 1 p.m. Saturday against River Falls