A fight to the top 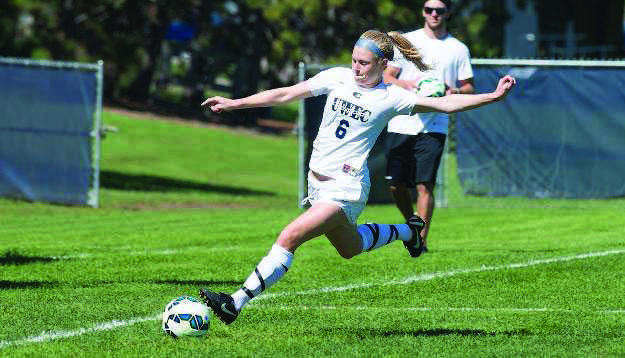 Senior captain Ashley Seymour attempts a cross during a game at Bollinger field.

Coming into the 2015 season, head women’s soccer coach Sean Yengo said his teams goal is to improve from their third place conference finish a year ago and compete for a top spot in a tough, hard fought WIAC conference.

Although the UW-Eau Claire women’s soccer team has some big preseason goals, getting the 21 new freshman on the team acclimated to collegiate soccer and getting everyone on such a large team on the same page is going to be a hefty challenge, Yengo said.

Despite the youth and roster overturn over the offseason, Yengo said he is confident in the leadership that his five returning seniors bring to the table, after only losing one senior in 2014.

“We have five seniors, and all five of them are equally as important to our team this year,” Yengo said. “They have all played big roles in the past couple years which goes a long way in them helping lead the girls.”

Top returners for the Blugolds include two all conference players from 2014, Ashley O’Connell, and Caroline Henderson, Tera Dennehey, Ashley Seymour and Megan Hanson who Yengo said he all expects to play very important roles in the 2015 campaign.

With high hopes coming into the 2015 season, Yengo said that he needs 110 percent from  O’Connell, Hanson and Seymour who were all selected as captains in the offseason and are looked up to as leaders.

“A large part of what we would like to accomplish this season centers around our group of 37 girls coming together to achieve a common goal,” she said. “With a large number of these girls being incoming freshman, it is important that they feel welcome and valued.”

Getting the younger players ready for game action quickly is something that the Blugolds will need to do as the WIAC conference play will be physical and tough once again Yengo said.

Although the Blugolds like to look at every game in the same way, Seymour said a certain few stick out to them such as their two road contests with conference contenders UW-Oshkosh, and UW-Whitewater.

Despite their previous matches with the two teams and their rankings in the conference coming into the season, Hanson said the team needs focus on their play instead of predictions.

“Our team needs to look forward this season and forget about past rankings as each game in the WIAC is a competitive one and any team can come out on top,” she said. “As long as we approach each game with confidence and a drive to win, our team has as great a chance as any to win the championship.”

In their opening game of the season Wednesday at Gustavus Adolphus College (Minn.) the Blugolds came up just short of a victory, tying the lions 2-2 after two overtimes didn’t provide enough time for one of the teams to score a go-ahead goal.

Samantha Matuszak and Shoua Khang both scored for Eau Claire in the first ten minutes giving the Blugolds an early 2-0 lead. However, the Lions responded quickly with two goals of their own in the 12th and 22nd minutes respectively, setting up a scoreless and defensive centered second half.

The Blugolds travel to Oregon over the weekend to face Lewis & Clark University Saturday and George Fox University Sunday.