With graduation nearing, UW-Eau Claire’s most accomplished speedster looks back on his Blugold career, and reveals what athletics have in store for him next 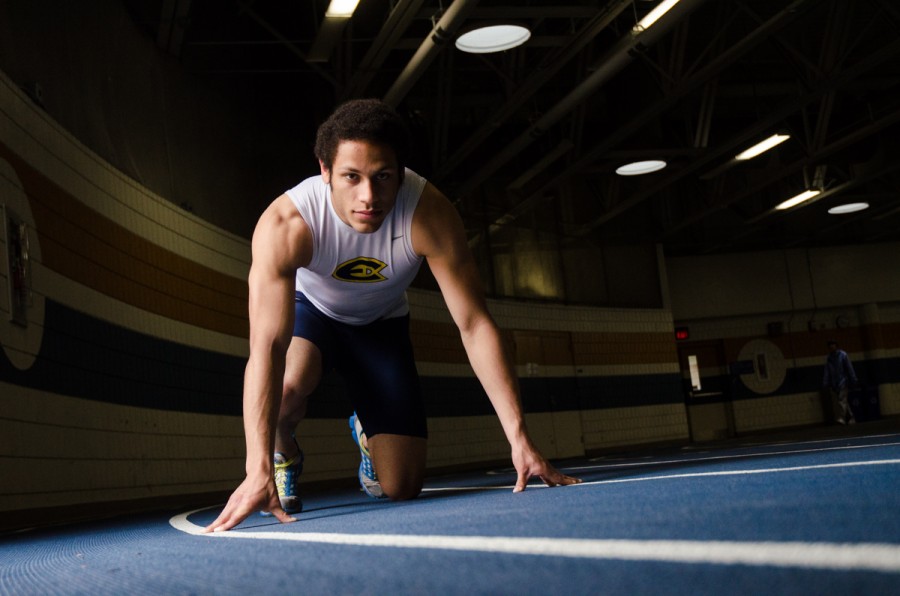 When senior Thurgood Dennis was in fourth grade, he and his mother, Juli Buehler, were biking down a familiar trail when something caught Dennis’ eye.

Off on a field, a game of Pop Warner football was taking place and the young Dennis couldn’t help but stare in awe at the sport that would one day change his life.

Dennis turned to his mother and said, “I am going to play this game.”

At the time, Buehler was hesitant of letting her undersized baby boy play such a violent sport.

Out of concern and a mother’s natural worry for her child, Buehler simply responded, “no.”

Angry and determined to prove his mother wrong, Dennis sat and stared at the field for hours, and every time he thought about breaking, the idea of accomplishing something someone said he couldn’t fueled him to stay put.

His mother, realizing Dennis’ spirit wouldn’t break, gave in and the following year Dennis strapped on a helmet for the first time.

This past November, Dennis played his final collegiate football game. For most college football players, once it’s done, it’s done.

But Dennis is not most college football players.

Despite all his accomplishments on the track, including opportunities to compete in the olympics, Dennis finds himself wanting more football.

It is his first love, and after participating in the Wisconsin Pro Day and not receiving any offers from NFL teams after the draft, Dennis said he isn’t giving up.

“It would be easy for me to just quit now and say football is a thing of the past, but I just can’t,” he said. “I don’t know what it is, but I am going to give this another shot.”

Dennis said scouts told him his lack of commitment to football was a large deterrent to him getting a big league call.

Being a member of the track team, while working in a leadership position at Davies Center, on top of being a full-time student made it impossible for Dennis to give 100 percent to football training, but after graduation he said he plans to rededicate himself.

Graduation is still a few weeks away, and before Dennis dons his cap and gown and walks across the stage inside Zorn Arena, his focus is on the NCAA Division III Men’s Outdoor Championships.

The No. 2 Blugolds are set to compete in nationals next week, and Dennis hopes to bookend his decorated Eau Claire career with a team national championship, an accomplishment foreign to the program prior to Dennis’ arrival three years ago.

A late-bloomer coming out of high school, Dennis received little national recruiting attention. UW-Madison offered him a half-scholarship in the fall of 2011, but Dennis was already enrolled in classes, and the common denominator remained: Eau Claire gave him the opportunity to play football.

After contributing in both sports his freshmen year, Dennis shot on to the national scene when he won the 60-meter dash at the national indoor meet, capturing both his and Eau Claire’s first individual national championship in school history.

Dennis’ victory marked the first of many individual and relay championships for the men’s track and field team, and head coach Chip Schneider said Dennis was a large catalyst in transforming the program.

“We are lucky to have him,” Schneider said. “A guy like that doesn’t come along often, and it’s the first time in my career to have a guy like him. He gives a chance to win a national title.”

Last spring, the Blugolds’ chances at a national championship were demolished when Dennis pulled his hamstring in the 100-meter dash at the Drake Relays.

Mentally depleted from school work and running on four hours of sleep in two days, Dennis entered the Drake Relays physically unprepared to race, and despite his body giving him warning signs throughout the meet to stop competing, as usual, Dennis didn’t quit.

This marked the first time in Dennis’s career his resilient attitude set him back.

Dennis’s mother was sitting in the stands snapping photos when through the lens of her camera she saw her son’s hamstring buckle.

“I saw him on the track, writhing in pain,” Buehler said. “I thought, ‘oh no this cannot be happening.’”

The injury was a major setback for Dennis — he failed to get healthy in time for nationals, and his chances at playing football after college darkened.

Faced with questions about his future, Dennis considered all options, even dropping out of school and focusing solely on a NFL career.

After talking with his coaches, family and closest friends, Dennis decided returning for this senior season and working closely with the athletic training staff to rehab was best for his future.

Maybe not his football future, but for his future as an ambassador of Blugold sports, as a multi-sport teammate and as a college student.

Dennis said looking back, he wouldn’t change a thing, and the memories he created are what makes being a Blugold special to him.

The most accomplished track and field athlete in Blugold history started every game as cornerback for the football team this year, and won an indoor track and field team championship in March.

No matter how Dennis’ career ends at nationals next week, his mother said her son choosing to attend Eau Claire is one of the best things that could have happen to him, and she is looking forward to what is next.

“Like my husband and I say, we don’t take him places anymore, we let him take us places,” Buehler said. “We are along for the ride.”

A ride that is far from over.