Getting stronger in the summer 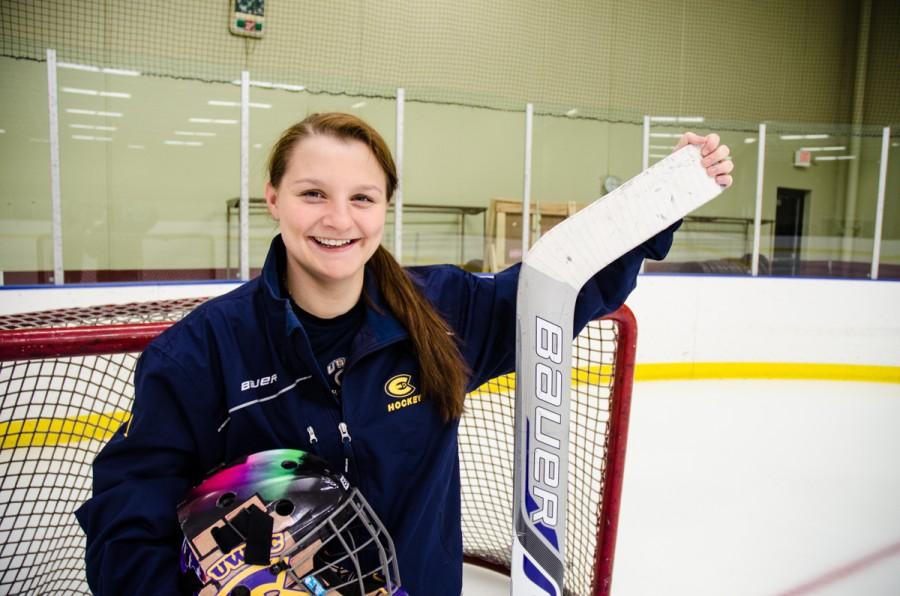 During a college summer, some head to the lake, some work a job or two and some simply kick back and relax.

For UW-Eau Claire women’s hockey goalie Paige Turner, all of the above are true. But on top of these plans, getting back in shape for her senior season after her second hip surgery is her number one priority.

Turner said over the summer, her schedule doesn’t get any lighter as she balances two jobs at Old Navy and Big Lots, works multiple goalie camps, follows through with plans with friends and family and continues her rehab and workouts to get her hip and body in better shape.

Turner said she will be lifting three times a day and running twice a day, while continuing her work with the Eau Claire Director of Athletic Training, Robert Stow, on her fitness and working on strength training at Momentum fitness, a local crossfit center.

Despite the busy schedule over the summer, she said she enjoys the grind because it is all worth it for her in the end.

“I have a ton coming up this summer, I know that, but all the work makes me better on and off the ice,” Turner said. “However, I also really do cherish and put the free time I have to good use.”

Turner’s training this summer, whether with Stow or on her own, is catered to her position in net, working on agility and quick movements. She said that is the most important aspect for a goalie, as well as flexibility and also getting her strength back in her body after surgery.

Turner said as a goalie, people see her position as the one athletes need to train the least for and do the least amount of skating in, but that is not the case.

“People think, ‘oh they are a goalie, they don’t have to train as much’ because the fact is they just have a little square that they protect,’” she said. “But usually we train the hardest because we don’t play in shifts and need to be able to stay in a squat for 20 consecutive minutes.”

Turner said she has battled with hip issues for quite awhile now, which has affected her mobility and balance on and off the ice.

Now, after her second successful surgery this spring, Turner said she owes it to her teammates to come back stronger and better than ever for her senior season.

Stow has begun working with Turner on overall fitness, strength and balance, and will continue throughout the summer.

He said he will be working to help her gain her hip strength back, which allows her to rotate them better when needed, along with her overall balance, especially in her squatting position.

“By elevating her from the pain and limitations she suffered from, she will functionally have a greater ability than before, Stow said. “Once she can take advantage of the full function of her hip, she will be able to train and do things that she wasn’t able to before the injury.”

Stow said once Turner is able to gain full strength back into the hip and get her overall fitness back up, she will eventually be able to get back onto the ice and adjust to skating and playing the game again.

But beyond getting on the ice, training to get stronger and working two jobs, Turner said she knows the importance of taking two days off on the weekends and just making some time for herself.

She said taking the weekend off is important so she can rest her body after a long week of training. She spends her time off swimming, golfing and relaxing with her friends and family.

Turner, who transferred from the University of Minnesota Duluth, an NCAA Division I school, said she made the change to Division III hockey because she simply didn’t want school controlling her and telling her everything she can and can’t do as a student-athlete.

“I wanted to have my own life and didn’t want to be run by my school,” she said. “But I also left for the reason that my former coach favored foreign players from Canada and Russia, giving them more playing time and bigger scholarships and things like that.”

However, after choosing to transfer to Eau Claire over other NCAA I schools such as New Hampshire and Dartmouth, Turner quickly learned that staying close to home and playing at a lower level was the best choice she could have made.

She said some of her best experiences have been made on and off the ice with her team in Eau Claire because she has been able to form amazing relationships with teammates, which she said is something not so prevalent between teammates at a higher level.

As Turner steps into a leadership role in her final season, she said she and the four other seniors on the roster will need to play a big part in being good teammates and role models for the underclassmen, as they will all need to adapt to the style of a new head coach after head coach of 15 years Mike Collins was let go.

Turner said she is really looking forward to her opportunity as a leader and giving the younger players the respect they deserve on the way to making them better.

“I’m just going to work my butt off,” she said. “I want to be in the best possible shape for my team to win next year.”