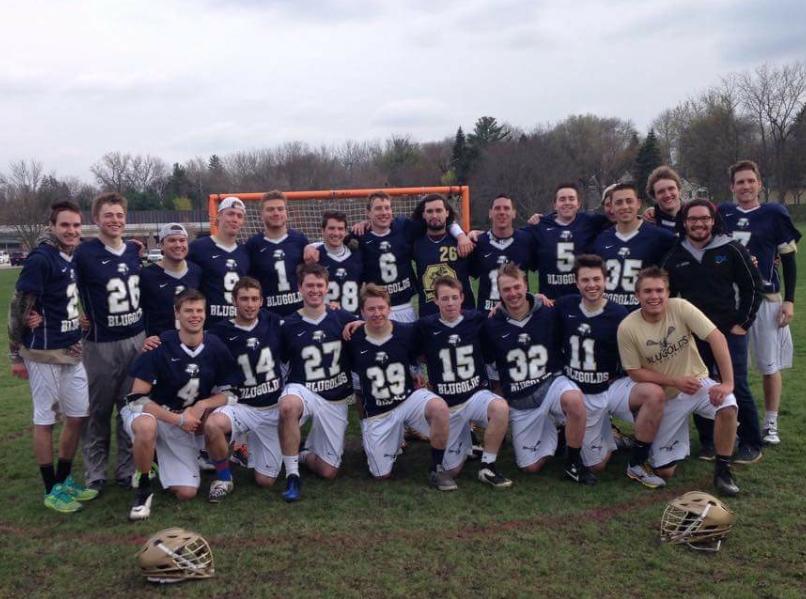 The UW-Eau Claire men’s club lacrosse team gets a picture after wrapping up their final weekend tournament of their spring season.

A “lax bro,” the typical stereotype lacrosse players all over receive.

But little do the people giving out these labels know that the “lax bro” stereotype is not so true when it comes to the UW-Eau Claire club lacrosse team.

Junior Thomas Rea said the stereotype is something that him and the rest of the team can’t stand because it isn’t true for them, as the team is just a normal group of guys with one thing in common: a love for the sport.

“The main reason I continue to play the sport is because of my strong passion for it,” he said. “Even though we aren’t affiliated with the school it’s still awesome to play at a collegiate level.”

Rea, who was voted a captain for next season said he has high goals for a team that showed they can compete with the best this year.

The team was one win short of making the A bracket for Great Lakes Lacrosse League playoffs and had to settle for the B bracket which they went 1-1 in to end their spring season.

Overall the team had a 5-4 record on the season, which Rea said could have been much better as they didn’t lose a single game by more than one goal.

“One positive point of our season this year was not losing a game by more than a goal,” Rea said. “This is something we can take into next year and build off of.”

Like many other club sports on campus, Rea said the team has both fall and spring seasons, but they are very different in what they are made up of.

He said fall is used to get new players accustomed to the team’s playing style and get everyone on the same page, while the spring season is the team’s official competitive season and includes a tournament at the end of the season.

“The spring season is what we put the most work in for and is our most important part of the year,” Rea said. “In the fall practices are about teaching players the basics of lacrosse and how to play, while spring focuses on gameplay.”

The Great Lakes Lacrosse League has six separate divisions in the midwest including the North Central Division which is home to Eau Claire and other area schools such as UW-River Falls, -La Crosse and -Stout.

Rea said they are lucky to be included in the GLL because it offers them a lot of options for scheduling with so many teams to pick from in the league, and also top competition.

However, he said despite all the opportunities to play club lacrosse in the midwest that he would like to see more opportunities in midwest schools for collegiate lacrosse teams as opposed to club teams.

“It would be nice if there were more schools in the area that had true varsity teams to give kids in the midwest an opportunity,” Rea said. “The majority of kids I played with in high school are playing club now so it would be cool if these guys got a shot in actual varsity lacrosse.”

Rea said as the team looks to next year after a solid 2014-2015 season, they will continue to set their main goal as making the A bracket in the spring playoffs and to keep up the strong defensive play they flashed this season which in return will hopefully help spark the offense and team chemistry.

“We had really good team chemistry this year,” Rea said. “That’s one of the best parts of playing with this club and we hope to carry that into next season.”