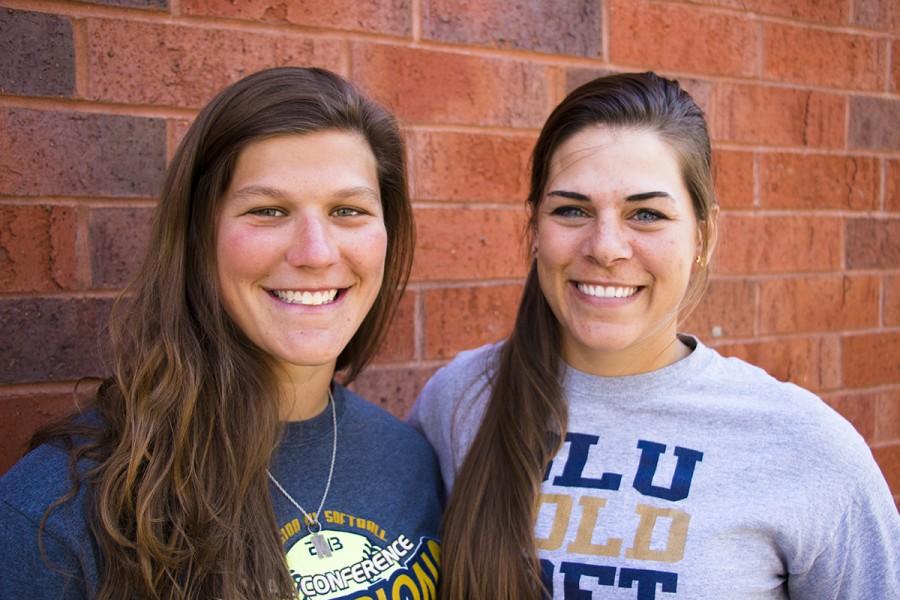 Amanda Fischer and Nikki Brooks, softball team captains, helped their team earn a 26-16 overall record this season. Fischer will end her Blugold playing career as one of the most decorated players in the program’s history.

Amanda Fischer has played softball for UW-Eau Claire for four seasons, and each season she left her mark on the field, moving to various positions.

Head coach Leslie Huntington said Fischer’s versatility is one of the many traits that stood out when she joined the team.

“She’s one of the most, if not one of the top-two most versatile players this program has ever had,” Huntington said.

While Fischer and the team were not able to become national champions, Fischer also was named WIAC position player of the year. Twice.

“I’ve been honored to play with this team,” Fischer said. “It’s been humbling, to work my butt off and have it pay off the way it has. It’s special.”

Since joining the Blugolds’ softball team, Fischer has played all over the outfield along with spending some time playing catcher. Over the past two seasons, she has settled into the third base position with a brief stint at shortstop.

“Her game speaks for itself,” teammate Casey Arnold said. “When we need it, she’s usually the one that has it.”

Fischer, who was named to the All-WIAC first team and All-Great Lakes Region first teams, shattered the career school record for stolen bases, tallying 101 steals — 26 more than the previous record.

But for Fischer, it’s never been about the records, she said.

Huntington described her as “a team player in the truest sense of the phrase,” and said she’s been humbled by the recognition over the years.

“It’s challenging when you have that kind of success,” Huntington said “You don’t want to come across as better than your teammates or the most important player. I don’t think anyone ever thought of Amanda like that.”

That was important to Fischer, she said, because she’s always loved softball for the team aspect.

The comradery of the team is what made every game special, Fischer said, and it was what associate professor April Bleske-Rechek immediately noticed when she watched her first game at Gelein Field.

“It wasn’t until the middle of the semester that I realized she played softball,” Bleske-Rechek said. “I wouldn’t have known how good she was if I wouldn’t have went. She hit two home runs and acted like it was nothing.”

Fischer has been a R.A. and campus ambassador since her junior year, and she said those opportunities presented the best way she could connect with new students and help them get comfortable on campus.

“I’m in love with Eau Claire,” Fischer said. “I fell for the city once I arrived on campus, and I’ve felt like it’s my job to show everyone what they can do and why they should love Eau Claire, too.”

After graduating, Fischer will join Huntington’s staff as a graduate assistant. The two hope Fischer’s time as a campus ambassador and team captain will help with recruiting and eventually coaching.

Fischer said she’s looking forward to developing her former teammates and the incoming freshman class next season. She said the chance to work alongside her coaches will be surreal, but she’s excited.

“I’ll see so much more as a coach,” Fischer said. “I won’t be thinking about myself as the as the player. I’ll be able to develop each player the way they need it, and I know (the coaches) will teach me how to be a great coach.”