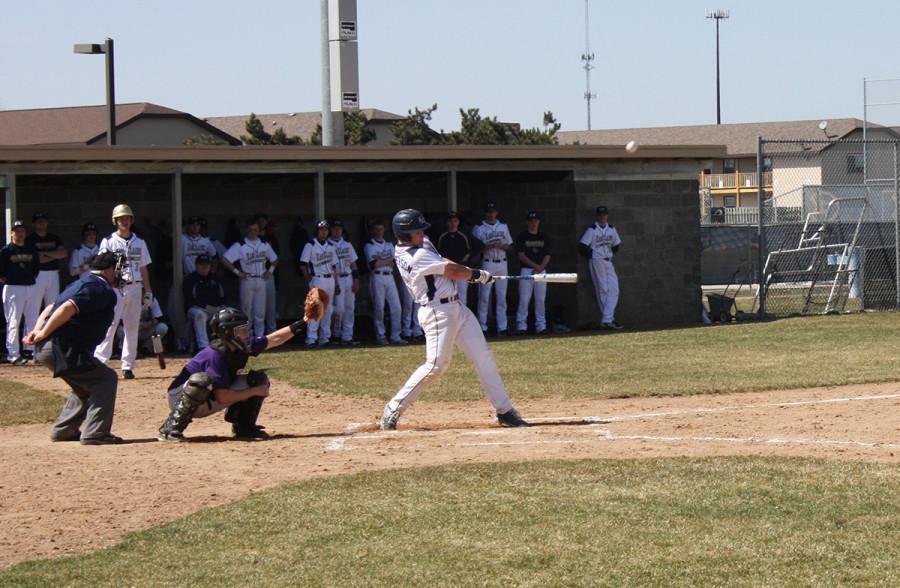 An Eau Claire batter connects with a fastball Saturday afternoon at Bollinger Field in the first game of a three game series with the University of Northwestern (Minn.).

No better words could describe the scene at Bollinger Field Saturday afternoon as the UW-Eau Claire club baseball team partook in a weekend series with the University of Northwestern (Minn.) to open their spring season.

As Eau Claire took the field to warm up, fans buzzed while players smiled and joked around with one another. However, despite the loose atmosphere in the first game of the three-game series, the Blugold pitchers were hit around, leading to a 12-1 loss.

However, a lot more goes into  the club baseball team than just practicing and playing games every weekend.

Senior pitcher Sam White said while the game is the same, the little things around the team are different from a school-affiliated team.

“The biggest differences in regards to actual competition would be that it is less of a time commitment and is more laid back,” White said.  “Even though it’s laid back we do take it seriously and want to win, but yet everyone gets a chance to play at least every once in a while.”

Along with the competition aspect of club baseball as compared to a school sport, White also said through apparel sales and team dues, the team does all the fundraising in order to pay for hotels, travel, uniforms, equipment and even umpires.

But perhaps the toughest aspect of not being a school-affiliated baseball team is not having a coach.

Senior team president and captain Zach Griebenow said because they don’t have a coaching staff, the four captains, including him, are in charge of multiple things during the season.

“It’s not always easy being a player and a coach but we make it work,” Griebenow said.  “We assess talent through baseball in the fall and in practice, along with making lineups during the season, which is tough at times.”

Eau Claire Sport Club Coordinator Jon Bollinger said although there are some negatives that comes with a club sport as compared to a school sport, there are also some positives.

“The positives are that there are no real roster limitations, and scheduling is more flexible,” he said. “But on the negative side of things, the clubs have to schedule all the games themselves and fundraise all of their money.”

Bollinger said the school sport of baseball was cut from Eau Claire in 1995, and a club team was then established in 1997. Since that time, players have continued to sign up for the club in large numbers for one big reason: their love of the sport.

“I joined the team for the love of the sport and I think that is what brings just about everyone to the team. It is great to be part of the team as well,” White said.  “It’s just a great way to make new friends that share the same love for the game that you have.”

Along with White, Griebenow also said  the team aspect and love for the game in general drew him to the club sport.

“The most rewarding thing about being part of the team is the relationships that you develop with your teammates though practice, games, and traveling,” he said.  “I have been a part of the team since my freshman year, and I’ve had the opportunity to play with so many great guys.”

However, Griebenow has even more responsibility than just making lineups and assessing talent as the club president.

He said in his role, he is responsible for scheduling all their games and scrimmages with the other club presidents, handling club funds and reserving practice times and hotels  when they travel.

White said as the team prepares itself for the spring season in fall with intrasquad scrimmages, they also set some goals for themselves.

“I would say that the goal is always to win as many games as we can and hopefully that will mean we win the conference and make it to the playoffs,” White said.  “I wouldn’t say that this is necessarily our biggest goal, but we are always wanting to have a good time too.”

No matter the goal, the funding, or the coaching situation, the love for the game keeps Griebenow and his teammates coming back every season.

“What keeps me playing baseball is not only the love for the game, but also the memories that are made with teammates on and off the field,” he said. “We spend a lot of time together with practice, traveling, hotels and games, so the whole team becomes a close-knit group.”