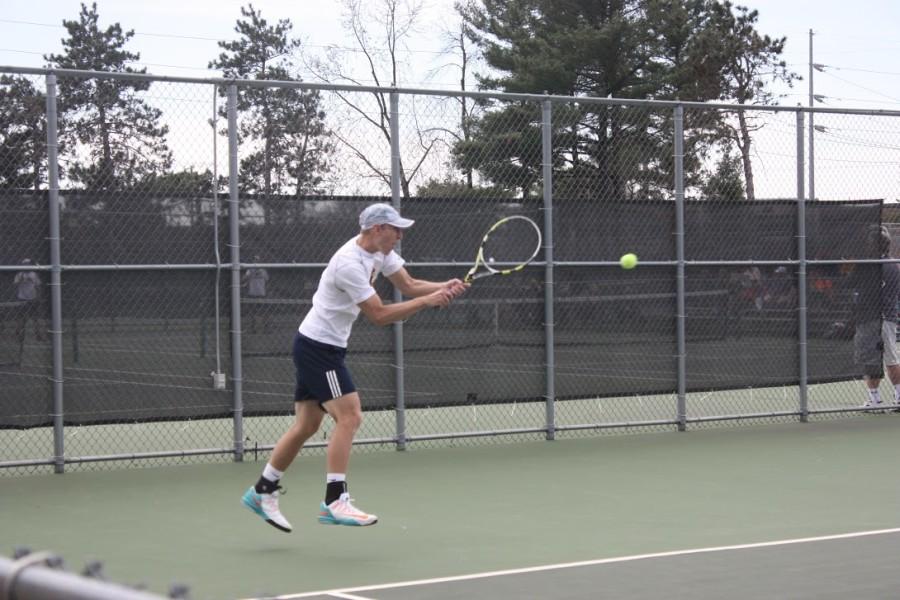 For as long as head coach Tom Gillman can remember, his tennis teams have always had tough battles with WIAC opponent UW-La Crosse.

This weekend boded no different as the UW-Eau Claire men’s tennis team dropped a hard-fought match 5-4 to the Eagles.

Despite the Blugolds winning two of the three matches, they couldn’t keep up with the Eagles veteran singles players.

Eau Claire showed their youth as they struggled to win points, as only freshman Andrew Rust at No. 3 singles and Andrew Dahl at No. 6 singles came away victorious after they both were able to fight back from behind.

“La Crosse just came out stronger than us in singles after we surprised them in doubles,” Hoffman said. “They are a veteran team that knows how to fight back and really showed that against us.”

However, the Blugolds picked themselves up after the tough loss and were able to fight back to sweep UW-Oshkosh 9-0 behind strong play, starting with Hoffman at No. 1 singles and all the way down the lineup.

Despite the quick turnaround against Oshkosh, Eau Claire struggled in their third and final match on Saturday against National contender UW-Whitewater, losing 9-1 to bring an end to their season.

“We played our best against Whitewater,” Gillman said. “But per usual, they were just too tough, especially with our guys physically worn down after a long weekend.”

The women’s team fared better than the men’s in both of their matches over the weekend against St. Scholastica (Minn.) and UW-River Falls.

In last weekend’s loss to Luther College (Iowa.) the Blugolds struggled in singles, only winning one match. This week was a different story thanks to a stronger sense of urgency, junior Paige Kuepers said.

“We came out with lots of fire in us and we were ready to play,” Kuepers said. “If and when we got down, we were able to make some slight adjustments.”

“Paige was our player of the week, and continues to have a very strong spring,” he said. “But also Madison Rossebo and Maddie Johnson continued to lead as seniors and play their best.”

Kuepers said a big reason for their improvement this week was the work on cutting out the unforced errors from their matches and giving up free points.

Although Gillman and Kuepers believe the team made some big strides this past weekend in their wins, they know next weekend’s matches in UW-Whitewater for the WIAC AQ Tournament won’t be easy, especially with La Crosse on the schedule.

“I would really like to give La Crosse a run for their money,” Kuepers said. “We always expect a tough match out of them, but we have to have the mentality that we can come out on top this time.”

Gillman said just like on the men’s side of things, La Crosse and Eau Claire always have tough matches that come down to the final point.

“Eau Claire and La Crosse always beat the heck out of each other on the courts every single year,” Gillman said. “It’s just a matter of this year staying mentally tough in order to get by them to give ourselves a chance.”