Going Hamm on the world 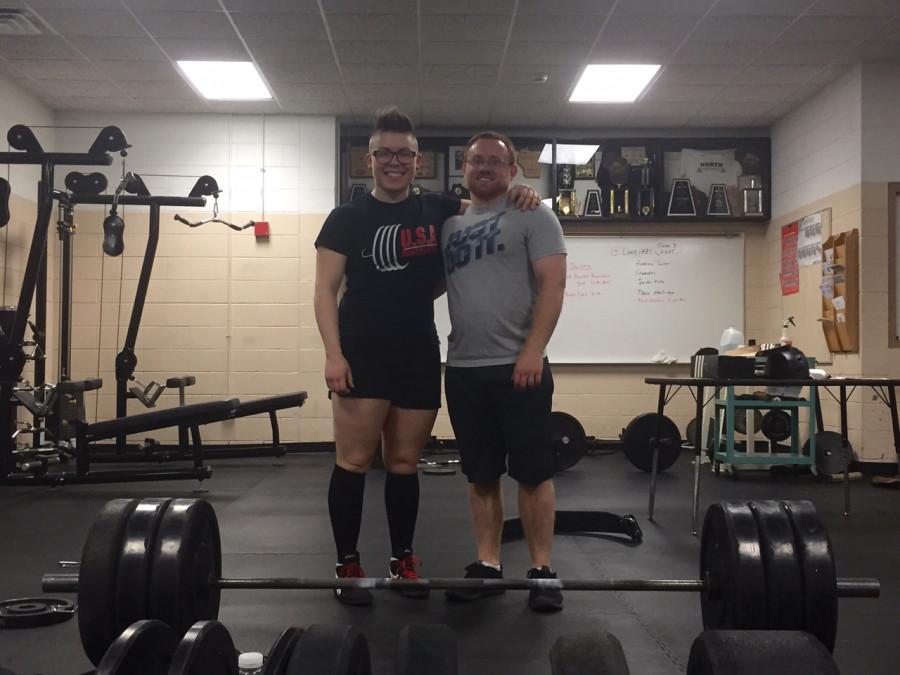 After a long day of classes, senior Mariah Hamm opens the door to 405 Graham Ave. Awaiting her is a set of two bare staircases, but at the bottom sits her sanctuary.

A basic gym. Filled with squat racks, benches, machines and free weights, but for Hamm this place feels like home.

It’s a place she’s dedicated nearly a decade of sweat, determination and focus to. A place filled with sweet victories and daunting defeats.  A place that ultimately continues to change her life.

After using her ID to enter, the former two-time high school state champion returns to her place of practice at 3D Fitness and is ready to begin her training for the world championships.

The small rectangular shaped weight room doesn’t have a window to the outside world but it is where one of the most accomplished powerlifters in the world trains.

Three weeks ago, Hamm, an art major, was in Atlanta winning her third collegiate national championship. There she broke collegiate and junior American records in both squat and bench press. She also set a new American total record of 1290 pounds in the 84 kilogram weight class.

At these meets, the amount of weight competitors lift in the bench press, squat and deadlift are combined together, and the lifter with the highest amount of total weight wins.

In her third year as a member of the national team, the five-foot-five athlete returned home after taking first and setting four records.

Dominating the powerlifting scene isn’t new to Hamm as she won two state championships before graduating from Osceola High School in 2011.

But like all the greats, she didn’t start at the top.

Hamm said she credits her success to a rigorous training schedule, a talented high school coaching staff and believing in herself

“A lot of the times it is all mental, and you can do the weight, but it’s just in your head,” Hamm said. “It’s pretty insane the things you end up doing that you didn’t think you could do. I didn’t think I’d squat 503 pounds.”

In the summer of 2013 Hamm found somebody who believes her just as she believes in herself, and the two have been training together ever since.

Justin Nelson, a 2013 graduate of UW-Eau Claire, and former state champion and national competitor, said Hamm asked for help preparing for an upcoming competition. The two knew each other through the sport prior to becoming partners, but they had never trained together.

Hamm was already on the world stage before working with Nelson, but he said their partnership is mutually beneficial as the two continually push each other to new physical limits.

“Being able to see her success with the time and commitment we both put in to her training and getting her to improve is rewarding,” Nelson said.  “Seeing that it is actually paying off because what we are doing is clearly working to some degree.”

A typical week for the two trainers includes squatting and other leg workouts on Mondays, bench pressing two times a week and deadlifting on Fridays. The limited rest the two get is what keeps Hamm at the top of the sport.

Nelson said Hamm’s desire to improve is unmatched. She is a level headed competitor that is capable of handling the adversity of long grueling workouts, and the competition of top tier talent.

“She just has something about her and really it is her dedication,” Nelson said. “Very few athletes or even people have it. It is hard to devote so much of your time in your life to powerlifting because it is more than just sport, it is a lifestyle.”

Hamm is embracing the powerlifting lifestyle, but said she doesn’t compete for the recognition or air-time. Instead, Hamm said she uses her skills to give back to youth interested in lifting weights.

Just as the two found national success of their own, they’ve helped train a new national competitor in Sam Kroll, a junior at North.

Kroll squatted 330 pounds and set a national record in bench press of 210 pounds.

Hamm said she hopes to help Kroll and any other North powerlifters continue in the sport after they graduate.

As Hamm trains her team at North, she is also preparing for the next world competition at the International Powerlifting Federation Junior and Sub Junior World Championships, and this meet is likely far from her last.

“You aren’t really a good lifter till you’re like 30 or 35 is your prime age,” Hamm said. “So I would like to continue lifting until I am dead.”