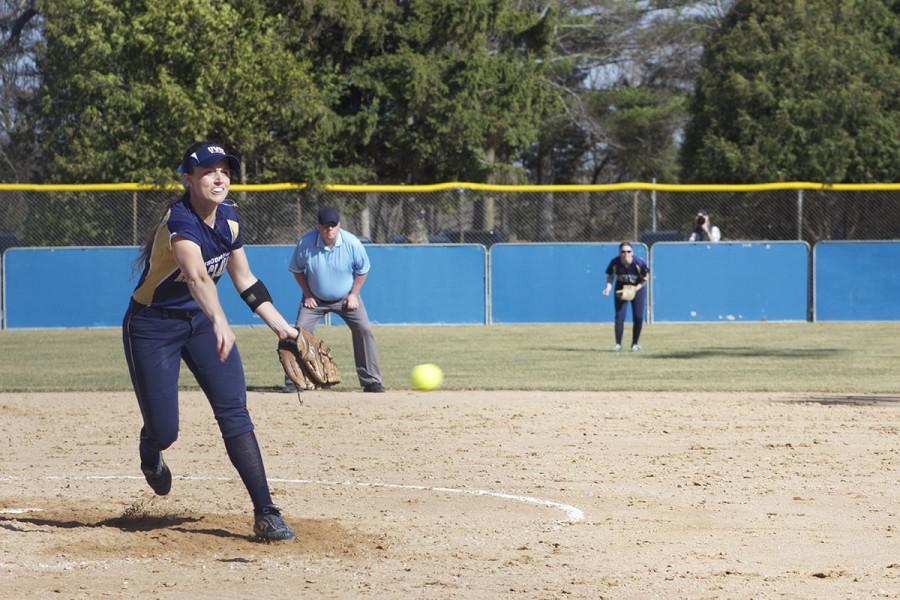 Senior pitcher Laura Raflik shoots off the mound at a Marian batter to land the third out in the top of the fifth inning.

In the first game, the Blugolds started slow and only recorded four hits in the first five innings. Senior third baseman Amanda Fischer hit a single home run in the third inning to give Eau Claire the 1-0 lead.

The next three innings went scoreless until the top of the sixth when Eau Claire’s offense took advantage of Blue Devil mistakes. Sophomore infielder Kenzie Winning reached on a fielder’s choice which allowed senior infielder Taylor Pierce to score. Then freshman outfielder Darby Raffel scored on an error by the catcher on the same play.

Sophomore outfielder Sam Noetzelman hit a two-run home run, leading senior outfielder Nikki Brooks to score on the play and increase the lead to 5-0. Stout scored two runs at the bottom of the inning but it was too late as both teams went scoreless for the final inning.

Game two started slow but didn’t stay that way for long when Eau Claire started a run of scoring innings after the second. Winning hit a single in the fifth inning which allowed Pierce to score from second base. The Blugolds scored two runs in the third, fourth and sixth innings before delivering the final blow with five runs in the seventh inning.

Gelein Field hasn’t had a scheduled home opener go as planned in more than three years, but that changed last Thursday when Eau Claire hosted Marian University for a doubleheader.

Eau Claire’s batters were on fire as the team scored four runs in the second and third innings of the first game.

“We did really well right away,” senior catcher Casey Arnold said. “We should have carried that energy into the second game.”

Following the 8-1 win, the Blugolds’ bats cooled down and only had one hit before the fourth inning. Eau Claire had success in the bottom of the fourth when senior infielder Deanna Gilane homered to left field, allowing Brooks and Raffel to score on the three-run play.

The Blugolds found themselves down 6-3 after allowing Marian to score five runs in the top of the fifth inning and struggled to get out of what would become a two-inning slump.

“Everyone kind of felt like we were going to (catch up) in the next inning,” Arnold said. “We kept waiting and waiting and no hits happened and when they did it was too late.”

“I wish I knew what happened,” head coach Leslie Huntington said. “We needed to keep playing at that high level (from the previous game), but these games can change based on anything.”

Huntington said consistency is one of the most important traits a softball team and its players can have and this team must become more consistent considering how few games are played at their home field.

“I don’t think we have much of a home field advantage,” Huntington said. “Our teams have played well at home, but we play so many games on the road to begin with that our general consistency must be there for us to be successful later in the season.”

Earlier in the season, Huntington said a good measure of success will be how the team stacks up against their conference competition. And through two conference doubleheaders Eau Claire looks to finish near the top of the conference.

Eau Claire traveled to UW-Stevens Point Saturday and found success early in the first game. The team scored at least two runs per inning for the first three innings, including scoring five runs in the second inning.

“We went into this game thinking it was the start to our second season,” Arnold said. “Conference play is when it truly matters because the wins matter so much more. (Coach) Huntington liked that mentality.”

The Blugolds swept the Pointers 14-5 and 13-2 to land a .500 record for the first time this season and elevate themselves to the No. 2 team in the WIAC.

Eau Claire has a stretch of conference away games over the next week, with doubleheaders set for 2 and 4 p.m. on Saturday against UW-Oshkosh and noon and 2 p.m. Sunday against UW-Whitewater.