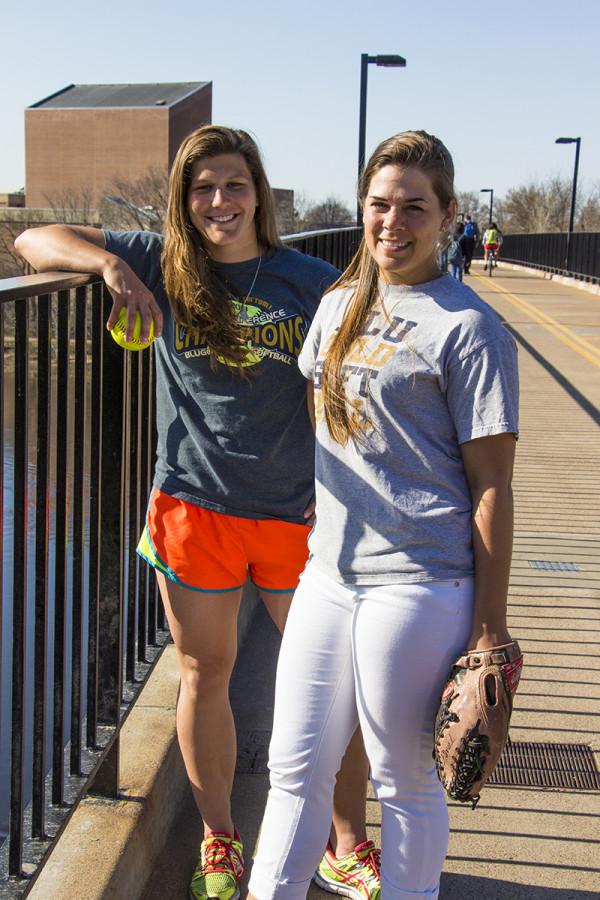 Cut from the same cloth. Like two peas in a pod. Practically twins.

These phrases are often used to describe senior softball captains Amanda Fischer and Nikki Brooks, as they frequently say the same things to their teammates off the field and think the same thoughts on it. And while the duo has recorded 46 runs and 55 hits this season, accounting for nearly 25 percent of the team’s offense, both captains believe their most important contribution to the team has been continuing to foster the family-like environment.

They couldn’t do it alone, as both captains said the support from the coaching staff is unlike any they had with previous teams.

Fischer said when she first came to UW-Eau Claire’s campus, a then-senior took her around campus and she felt herself quickly becoming one of the sisters.

She and Brooks have been on the team since their freshman year. In that time they have seen their upperclassmen friends and role models graduate, leaving them next in line to fill the shoes their predecessors left for them.

“In my first couple years here I had really great leaders I looked up to, one of which is actually our assistant coach right now,” Fischer said. “It was great to have those older teammates and mentors that helped me as an individual, younger player who wanted to be a leader on the team so badly.”

She said the former captains helped her tremendously by learning how to communicate with the team in an effective way and learning how to handle her teammates when they might not be playing well.

Knowing what to say and when to say it, Fischer said, was the most important thing she learned from her mentors.

“Having those mentors here early on definitely helped shape who I am as a leader now,” Fischer said.

“You’re challenged with diversity, confrontation and challenged with being away from home,” Brooks said. “One of the things I love about the program is coach treats us all like adults. If players have problems with other players, she expects us to confront the issue and work it out ourselves.”

She said working with the younger players on the team has been a major focus of hers this season before she leaves. Making sure all the players are on the same page and they understand what’s happening is usually the biggest concern.

Along with that, mental struggles are common among the younger players.

“One of the huge moments I’ve had was when a player came up to me and said they didn’t know what was going on and they couldn’t get into their groove,” Brooks said. “I told her to play ball, and while it seems simple, there’s so many things we’ve learned in this program that can sometimes keep you from just reading the pitch and making a decision to swing or not.”

On the field, the two have focused on reading the vibes of the players around them and monitoring any momentum shifts within games this season.

With the experience both players have on the team, it’s become easier every season to sense where a game is heading.

“The big calling moment is when you feel an energy shift in the game,” Brooks said. “If we get an error and a runner on base, we take those timeouts to prevent momentum from shifting and snowballing on us.”

They said because of the nature of softball, games can become lopsided and get out of hand in only an inning. That in itself makes it vitally important for the captains to keep track of.

However, Brooks said the compatibility she and Fischer have makes their roles as captains much easier. Fischer agreed and said it’s been easy to lead with Brooks.

“We always seem to be thinking the same thing at the same time,” Fischer said. “… We’re on the same page with different sorts of things and I think with us, we’re both vocal leaders and we’re both physical leaders.”

Both share pride for their program and the work they’ve put toward the team every year, but the same pride makes accepting graduation and leaving the program difficult.

While both players will leave friends behind on the team, the team is also losing two productive players and leaders.

“Amanda Fischer has the best instinct a player could have,” Brooks said. “She’s got all the physical skills you could ask for in a player. Emotionally, she cares so much about people that she’ll always be a great leader.”

Fischer held a similar sentiment about her fellow captain.

“Nikki Brooks is a phenomenal leader, she will be tough when she needs to be, she genuinely cares about everyone one the team and she loves the game of softball.”

As the captains prepare for the final stretch of conference match ups this season, they are preparing to leave the program. But in a way, they will never leave.

“We’ll never be out of this program,” Fischer said. “These people will always be our family and nothing can change that.”