Athletes take a chance by competing in extra sports 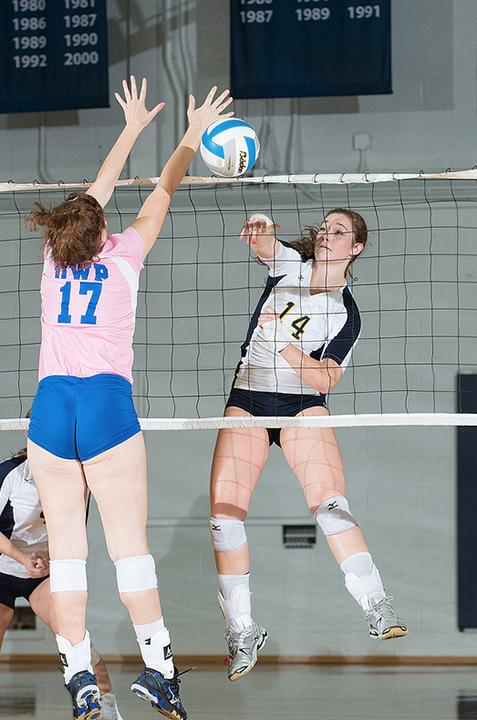 “You don’t have an offseason,” senior Thurgood Dennis said.

This is reality for dual-sport athletes.

Some students arrive to college ready to put in the work to complete a double major. The same can be said about athletes who want to excel in multiple sports during their time on campus.

Many athletes double dip between cross country and track and field, as both sports rely on conditioning for running. Other athletes’ transitions from one sport to another is not as organic, as UW-Eau Claire has volleyball, gymnastics and football players who transition to track and field during the year.

Often enough, this isn’t the first time these athletes have faced transition from one sport to another. For Dennis, he tried to play whatever sports were being played around him back in middle school.

Dennis was focused on football during his freshman year of high school, but his coach wanted the football players to play other sports to stay in shape during the football offseason. So Dennis looked into different spring sports.

“If soccer was played in the spring, I would have never ran track,” Dennis said. “I tried out for the tennis, golf and baseball team before taking the hint and buying a pair of track cleats.”

He tried out for the winter term basketball team as well, but after being cut, was introduced to organized weight training. Dennis said it became the missing staple in his year-long athletic catalogue.

Dennis played football, weight trained, and ran track and field every year before becoming a Blugold, which he said was integral in developing him to be a collegiate dual-sport athlete.

“Training is key to keeping good shape,” Dennis said. “I had to stay in good shape almost constantly, so it definitely conditioned me for Eau Claire.”

The early exposure to weight training in high school better prepared Dennis for the collegiate level, and he said weight training is the balance he needed to be able to shift from the football field to the track.

Track and field head coach Chip Schneider considers himself lucky to have dual-sport athletes on the track. He said while there’s constant worry regarding other sport injuries, he’s pleased to know the athletes are staying in shape.

“Some other schools see dual sports as a negative,” Schneider said. “They think the athlete can’t put all the time toward one sport in particular. That part’s true. Depending on which sport is currently happening, we let our athletes focus on that.”

He said many college athletes come from high schools where they have already played more than one sport a year. Schneider said it helps many athletes stay balanced, like Dennis.

“For our athletes, we think it helps them,” Schneider said. “If you take a routine away from an athlete, sometimes they don’t react well. Our athletes know their bodies and know what they need to do to continue to perform at a high level.”

Upon high school graduation in 2013, sophomore Mackenzee Pierog was set to play volleyball in the fall as a Blugold when her track and field coach suggested she also try out for the indoor and outdoor teams.

Pierog made the track and field team as a multiple event athlete at Eau Claire and quickly realized how much time it required.

“You have less opportunity, I always joke it’s not the stereotypical movie college life,” Pierog said. “Maybe I don’t have time to go to the movies with friends, but my team are my friends. When you’re riding on the bus together, that’s your social bonding activity for the weekend and so is cheering each other on. I don’t think you’re missing out on anything, it’s just different.”

Junior gymnast Julia Stedman used her gymnastic ability to propel her to not only end her season at the national level for the sport, but also end her track and field season at nationals.

She said if she didn’t compete in gymnastics, she wouldn’t have had the ability to do track and field at the collegiate level.

“The conditioning and strength I have in (gymnastics) is kind of the training that I use for track,” Stedman said.

Stedman competes in the full season of gymnastics and only competes in the outdoor track and field season. Typically, her seasons run into each other. This year, she said, she competed at nationals for gymnastics on a Saturday, and then the following Monday was on the track for practice, leaving her only one day in between sports.

Dennis said finding the time for friends, school work, sleep and anything else is the challenge of being a dual-sport athlete. He looked back to last track season when he pulled his hamstring as an example of his time management not working in his favor.

“I saved up all of my homework assignments for the next week and I did them all,” Dennis said. “I had three all nighters and ran my body down to the ground. The next weekend at (the conference meet) I pulled my hamstring.”

He said he’s fortunate to have had the injury his junior year, as the indoor track and field team was able to win the national championship this season.

As far as the work required to succeed as a dual-sport athlete, Dennis said he wouldn’t have it any other way.

“My college athletics career exceeded my expectations,” Dennis said. “With athletics, classes and working in Davies, everyone gave a little bit for me to excel with everything. I’ll always be thankful for that.”