Wrestling among the nation’s best

A pair of Blugold wrestlers are competing at the national tournament 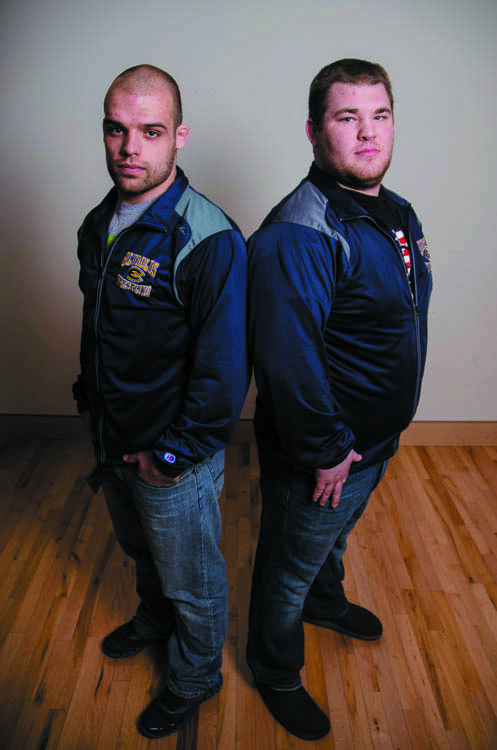 No matter the adversity Mat Rieckhoff and Justin Karkula were faced with this season, whether it was battling through an injury or mental and physical fatigue, one thing was certain prior to every meet.

Their fellow Blugold wrestlers were there cheering, instructing and encouraging them throughout every second of their match.

But as the two national tournament- bound wrestlers prepare for the biggest competition of their collegiate careers this weekend, their constant support system will not be on their bench.

On March 12, Rieckhoff and Karkula boarded a plane for Hershey, Pa. without their teammates — leaving a massive part of their support system behind them.

Only the two UW-Eau Claire coaches made the trip to the NCAA 2015 Wrestling Championships, and head coach Jared Evans said though it is an adjustment not having the entire team with them, the national tournament experience is going to be memorable.

“These guys are getting a lot of one-on-one attention, and they have been the last two weeks,” he said. “We are able to grow together with the coach and athlete relationship because we start to understand each other more.”

In preparation for nationals, all focus in practice was on Rieckhoff and Karkula, Evans said. He has been able to break down his lessons to the two wrestlers in a very specific manner and tailor his teachings to best fit the potential All-Americans.

Karkula (28-18) wrestles at 285 pounds and finished third in the NCAA Division III Regional Wrestling Tournament two weeks ago to qualify for the national tournament. Evans said the heavyweight wrestlers success this year is a testament to his toughness in practice and on the mat.

The sophomore transfer from UW-Whitewater is a tone-setter for the Blugolds, Evans said, and now that he’ll have a taste of national tournament wrestling, he expects Karkula to stay hungry while showing the younger wrestlers what it takes to make it.

“It is so important we had young guy make it because it sets the bar,” he said. “Now Justin Karkula is on a mission for next year knowing he can compete at a high level and the other kids are just going to follow.”

Karkula qualified for the national tournament after finishing third in his weight class at the NCAA Division III Regional Wrestling Tournament. He was awarded a first round bye but lost in the second round.

With his season on the brink of ending, Karkula refused to be denied a spot in the national tournament. He won his next three matches, all with scores of 20-12.

He said the moment his post-season ticket was punched did not feel like reality.

“It didn’t really hit me until we started practice again that I was still going,” Karkula said. “It’s just one of those things that you don’t really believe, but I knew I could do it if I did what I had to do.”

After qualifying for his first national tournament, Karkula said he doesn’t know exactly what to expect. His plan is to approach each match as he did during the regular season and not let his emotions get the best of him.

Karkula said having a teammate to train and prepare with has made the experience easier. The two have helped each other throughout their two-week preparation for nationals, and Karkula hopes to embody his teammate’s tournament advice, as this is not Rieckhoff’s first time on the national stage.

“It is kind of a shock when you get there and realize this is the level you have to compete at,” Karkula said. “Mat’s been here before, and he is one of the guys I look up to.”

The 184 pound wrestler qualified for nationals his junior year, but has not been back since. Rieckhoff said he is grateful for the opportunity to continue his wrestling career, especially because he didn’t know if he’d ever get back to nationals.

Rieckhoff, a fifth year senior, has battled injuries throughout his Blugold tenure, but this season he was able to stay healthy enough to peak at the end of the season and qualify for the meet that has evaded him since 2013.

He said though he wishes more of his teammates were joining him, two Blugolds competing in the national tournament is vital in starting the wrestling movement his head coach plans on bringing to Eau Claire.

“The biggest thing for me right now is to be able to represent our team well,” Rieckhoff said. “I wouldn’t be at the national tournament if it weren’t for every one of the guys in the room pushing me, so this could be a big opportunity for us to do well and instill some confidence in our younger guys.”

This past week, after Rieckhoff’s final practice as a Blugold, the unexpected occurred.

He teared up as he realized his time as  an Eau Claire wrestler was coming to an end.

Evans said he witnessed a wrestling room that filled up with emotion. Rieckhoff’s teammates couldn’t help but break down and acknowledge the five years their captain has dedicated to Blugold wrestling.

“Mat Rieckhoff is an ambassador for UW-Eau Claire athletics,” Evans said. “He is the core of this wrestling program, and he is going to be an unbelievable coach someday.”

No matter the way the national tournament ends for Rieckhoff and Karkula, and despite the fact Rieckhoff will end his career and Karkula his season, the two will meet their finales in the same fashion they boarded their plane to nationals — together.