Softball getting back into the swing of things 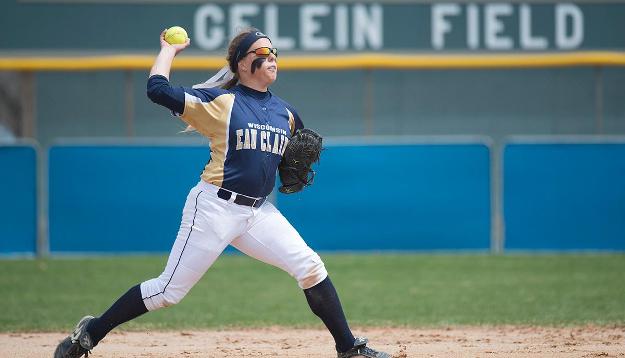 The UW-Eau Claire softball team started its 2015 season with two losses to Buena Vista University (Iowa) last weekend. Down two games to start the season isn’t often a great situation to be in, but head coach Leslie Huntington said she’s excited to watch this season unfold.

Even with the 5-2 and 2-1 losses in the Irish Sports Dome in Rosemount, MN, Huntington said the games were much closer than they appeared.

“I saw good things from the games,” Huntington said. “We were two hits away from winning those games.”

Huntington wasn’t shocked to see the offense not reach its full potential, as the coaching staff emphasized pitching and defense in practice leading up to the first tournament. With many sports, execution can determine whether a team will win or lose, and this holds true for the softball team this season.

“We’ve improved our hitting, specifically our timing,” Huntington said. “(The games) didn’t end the way we wanted them to because we couldn’t execute when we had to.”

She said the players have improved their ability to adjust the timing of their swing while up to bat. Huntington saw this last weekend, and as the season goes on, she expects this to help the offense as the players get back into the competitive grind.

While the Blugolds wait for the snow to melt, they will play all out of state games in March. The team is set to compete in an indoor tournament this weekend, then stop in Illinois for two doubleheaders as they travel to Texas during spring break to play against five teams from Louisiana and Texas.

“It’s a good opportunity to see competition we do not usually face,” Huntington said. “ … the (Texas) tournament will be a good place to see what the team will have for our conference opponents.”

After the team returns from Texas, they face WIAC teams throughout April. The first four of eight conference doubleheaders will be hosted by Eau Claire, then the team will travel to UW-River Falls, UW-La Crosse, UW-Platteville and UW-Superior before the WIAC championship.

The Blugolds were 25-16 overall last season, going 9-5 in conference games and lost their last two games in the WIAC championship. The team lost only two seniors last season, and with most of the players returning, the team is glad to have a roster loaded with senior talent.

“Seems like the first time in a while we’re not starting freshmen,” Huntington said. “It should be huge for us. Letting the freshmen have time to watch and develop under our upperclassmen will be good.”

Huntington said keeping strong competition on the roster is the best way to ensure the team has the best players on the field.

Eau Claire is set to face Central College (Iowa) for a doubleheader at 10 a.m. and 12:30 p.m. on Saturday at the Rochester Dome in Rochester, Minn.