Eau Claire is out of conference tournament, still in contention for national championship bid 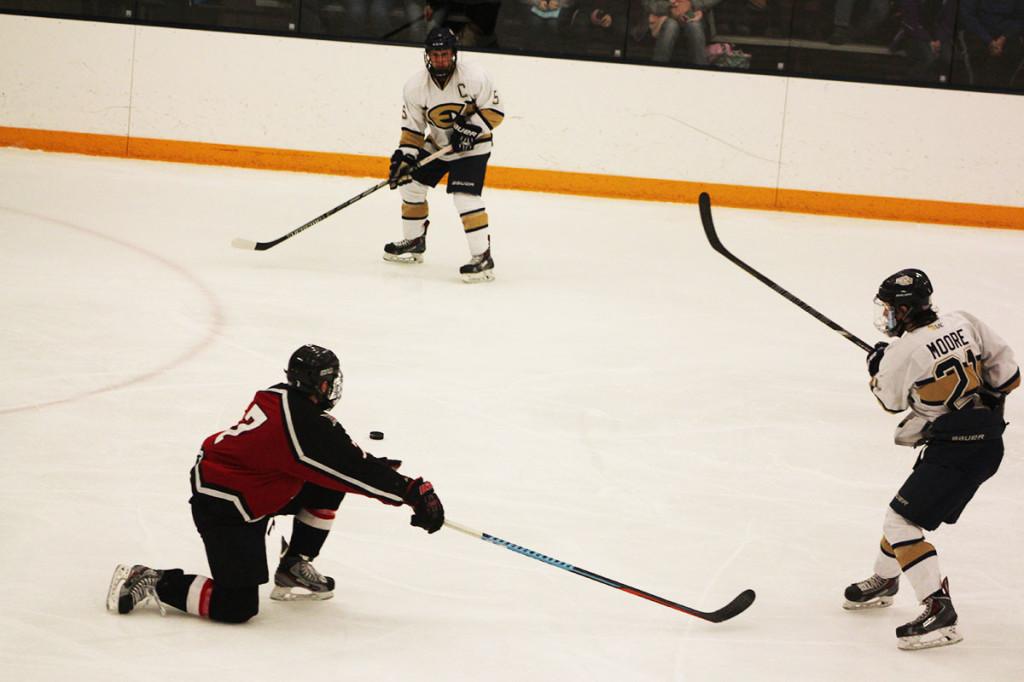 Patrick Moore passes the puck to Jack Callahan against the Falcons.

When a win or a loss is decided with one play, it’s often difficult to accept.

This was the case when the UW-Eau Claire men’s hockey team gave up a penalty shot and lost the WIAC semifinals to rival UW-River Falls Saturday night, it seemed like a bad dream to Blugold fans.

Walking out of the Hobbs Ice Center, shouts such as “this can’t be how it ends” and “a penalty shot to my heart” were heard across the parking lot.

“We were playing hard,” Loen said. “We were strong on pucks and doing everything we had to.”

Head coach Matt Loen had confidence entering the sudden death period, but still had frustration from the night before. He said the team shouldn’t have been in the situation to begin with.

Loen said he thought the team became complacent during game one on Friday, when they were up 3-1 and let the game get away from them.

“The referees put away the whistles (on Saturday night) so to speak,” Loen said. He thought there were penalties they didn’t call, but could have in the mini-game. Loen was OK with it because he believes the players should decide the game, not the referees.

“To get that call at the end of the game was a bitter pill to swallow,” Loen said.

By this point of the night, the teams were essentially in the fifth period and both sides showed signs of exhaustion. Line changes and player substitutions were made regularly.

“We were pretty much playing all four of our lines,” Loen said. “Anticipating the depth that would take over and hopefully wear River Falls down enough to get a goal was my philosophy.”

Seniors Ross Andersen and Jack Callahan will graduate and leave the team following this season, but Loen has confidence in the flock of freshmen he coached this season.

“I think they’re on the right course,” Loen said. “The biggest thing for us is not being a division I program. We have our 19-week season but if our guys can dedicate themselves to a 52-week season, I think we’ll be a tough team to deal with for many years.”

The NCAA national championship tournament bids will be released on Monday and Eau Claire is expected to still be ranked fourth in the west. If the committee allows four teams from the west, the Blugolds’ season will continue.

“I’m not looking at next season until Monday,” Loen said. “If we don’t make it, I’ll look then. But as of now, this isn’t over.”