Blugolds victorious in both matches over the weekend, extend win streak to four 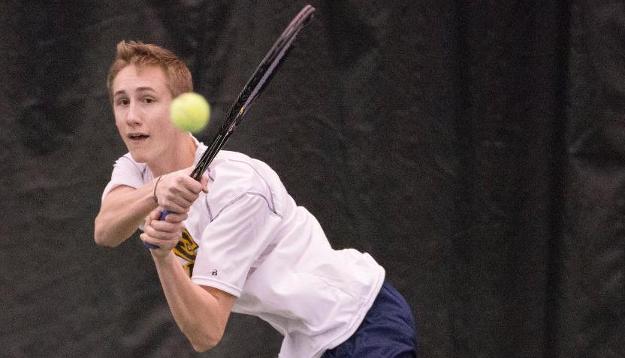 The UW-Eau Claire men’s tennis team broke into the national rankings at No. 18 last week, and head coach Tom Gillman said his team continues to stay focused no matter the challenge.

This bode true over the weekend as the Blugolds hosted and fended off St. Scholastica (Minn.) 7-2 on Friday and Carthage College 5-4 Saturday afternoon.

On Friday, the Blugolds won four matches in singles, and a sweep in doubles sparked from sophomore Will Weyenberg and freshman Andrew Rust’s play at the No. 2 spot in the lineup.

Gillman said the doubles teams’ performances carried the teams success this weekend, especially after Weyenberg and Rust struggled the past weekend as a duo.

“The improvements at two doubles was huge this weekend in comparison to last,” Gillman said. “It made a huge difference between our loss last weekend and our wins this weekend.”

The Blugolds’ Saturday match with Carthage College came down to to the final individual matches.

Gillman said he credits Saturday’s win to the ability to close out matches when it mattered, and said it all started with junior Kyle Hoffman.

“Kyle, along with a number of our other singles players came up huge for us down the stretch Saturday,” Gillman said. “It’s just a credit to all of our players improving week by week.”

The win over Carthage College, who ranked No. 17 at the time, is the second of Eau Claire’s wins over ranked opponents this season.

Hoffman said he credits losses to tough opponents like these in previous seasons as fuel to the team’s fire.

“Last season we lost a close one to Carthage and a few other ranked teams,” he said. “Those losses just motivated us to come back even stronger this season in order to get revenge.”

Hoffman said last weekend’s victories were especially huge because they were part of a very small home schedule for Eau Claire, and they were able to take advantage of the home courts.

Gillman said although the Blugolds are feeling confident after the big wins over the weekend, they are staying level-headed and taking their schedule one match at a time.

“We just need to stay disciplined when things aren’t going the way we want,” he said. “If our young players manage their matches and keep good intentions, we will continue our success.”