The Blugold women’s and men’s basketball teams both qualified together for the WIAC tournament for the first time since 2009. The women are home Feb. 26 while the men travel to UW-Whitewater 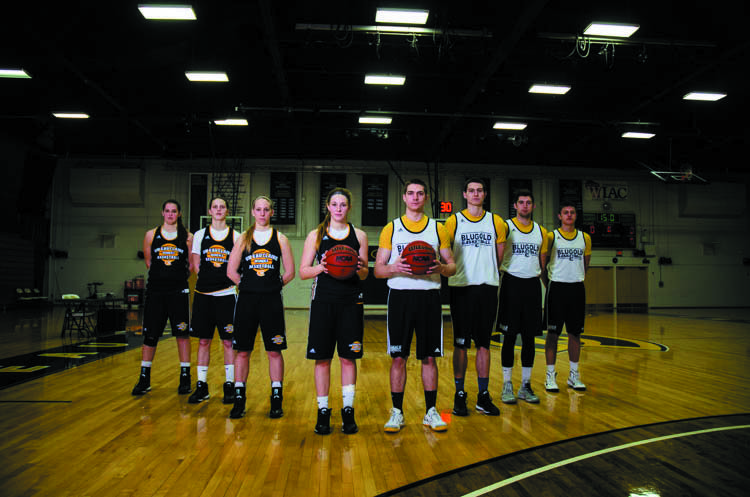 A month into its season, the UW-Eau Claire men’s basketball team was faced with more questions than answers after a 67-58 loss to UW-Superior.

Last season’s leading scoring Adam Hjelter was lost for the year to a hand injury, senior Lewis Mau was battling an ankle injury and the Blugolds were in need of scoring outside of Tyson Kalien.

The season was young, but injuries were piling up and the season’s outlook was bleak.

But after a few lineup adjustments and time to mold together, head coach Matt Siverling’s Blugolds are now playing postseason basketball.

For the first time since 2008, the UW-Eau Claire men’s basketball team advanced to the semifinals of the WIAC tournament after defeating UW-River Falls on the road Tuesday night 81-79 in overtime.

“Going into the game we wanted to attack the basket,” Siverling said. “I thought our guards did a great job getting to the rim and finishing plays.”

The Blugold guards combined for 65 points and all were in double figures. Sophomore Jack Martinek had 12 points, Mau 16, Kalien 18 and freshman George Diekelman came off the bench with 19.

Siverling said the freshman’s performance played a vital role in upsetting the third seeded Falcons on their home floor.

Diekelman scored 11 of his 19 points in the first half and after 20 minutes of play, Eau Claire trailed the Falcons 40-33.

The Blugolds opened the second half with back-to-back 3-point shots from Kalien. The sharpshooter’s spark propelled Eau Claire’s 20-8 run and after two Diekelman free throws Eau Claire held a 53-48 lead.

Basketball is a game of runs though and after a pair of Falcon defensive stops, River Falls started a run of its own.

In the final six minutes, neither team could pull ahead. With 23 seconds remaining, tied 71-71, Eau Claire had the ball and a chance to win the game in regulation.

After a River Falls timeout, Eau Claire set up for the final shot.

The Blugolds swung the ball around the perimeter several times before Martinek drove the lane and put up a contested shot that rimmed out at the buzzer.

Up 78-77 in overtime with 17 seconds remaining, Mau was fouled and sent to the free throw line to shoot.

Up next for Eau Claire is No. 2 ranked UW-Whitewater at 7 p.m. Thursday inside Kachel gymnasium.

The Warhawks went 22-3 overall this year and 15-1 in conference play. Their lone loss came against UW-Stevens Point two weeks ago.

They are the number one seeded team in the WIAC tournament and received a first round bye.

Whitewater is led by the senior duo of Quardell Young and KJ Evans, both averaging 15 points per game.

Cody Odegaard completes a trio of seniors that averages double figures in scoring.

The Blugolds lost to the Warhawks by one point earlier in this season at Zorn Arena, but Siverling said solid execution and ball control is the key to upsetting the national powerhouse.

When the preseason poll made its appearance in late October, Courtney Lewis and Kristin Sahr scrolled down the list to find their UW-Eau Claire women’s basketball team predicted to finish sixth in the WIAC.

Both seniors, who, along with Rachel Egdorf, are the only players on the current roster with NCAA tournament experience, went on a mission to prove the poll wrong and get back to postseason play.

Friday night, the Blugolds will play as the No. 2 seed in the conference tournament after a 10-3 finish to the season propelled them to a first-round bye and two wins away from automatically qualifying to the NCAA field of 64 teams.

“That really lit a fire under us,” Sahr said of the preseason poll.

While some might look at the 6-6 start for the Blugolds as a bump in the road, head coach Tonja Englund said it served as a building block for conference play. Englund said according to the NCAA ratings percentage index, her team played the 20th toughest schedule in the country out of 440 NCAA Division III teams.

The Blugolds used their experience from the tough non-conference schedule to close out games in the WIAC season and win in a plethora of ways. That was good enough for an 11-5 record in conference, and because they beat UW-Oshkosh Saturday, they secured a first-round bye and made the path to the WIAC championship game come through Zorn Arena.

“We are a much better team at home, and I think most teams would say that, but we’re obviously much more comfortable in Zorn Arena, which helps us a ton,” Englund said of her team’s 10 wins in 13 tries at Eau Claire.

Defense has keyed the Blugolds during their January and February games. They are allowing just 58 points per game and are first in the league in blocked shots. They have a taller roster than most teams, and Englund’s used a stifling 2-3 zone to force teams to shoot from the 3-point line instead of getting easy baskets around the rim.

“A lot of teams right now are dribble-drive happy, and not a lot of teams are looking to score from the outside,” Lewis said.

They haven’t allowed a team to score more than 70 points since Dec. 10, and it’s a defense they plan to keep the conference tournament to slow the game down and grind out a win.

Englund’s crew has also beaten every team left in the conference tournament other than fifth-seeded UW-Stevens Point, which would have to win on the road at UW-Platteville, beat sixth-seeded UW-Whitewater and upset third-seeded Oshkosh to create a matchup with the Blugolds on Friday.

They have already swept Platteville, Whitewater and Oshkosh and beat top-seeded UW-Superior earlier in the year. While that gives the Blugolds a lot of confidence knowing they can play with anyone, the upperclassmen-heavy squad’s focus is on what they can control.

“Our game plan is to basically do what we need to play well,” Sahr said. “We’re ready to succeed, we’ve played all these teams … and we’ve played them for years.”

At the end of the day, Englund said it’s going to come down to everyone playing well together on the same night. In a midseason stretch, it was point guard Teenie Lichtfuss controlling most of the scoring for the Blugolds. Sophomore guard Abby Midtlien carried the team in wins against Whitewater and Platteville, and Lewis has had two-straight scoring outbursts to earn WIAC player of the week.

If everyone in the rotation is at the top of their game, including shot-blocking on defense from post players Egdorf and Ellen Blacklock, Englund thinks the team can make not only a run at the conference tournament championship, but also grab a home game in the NCAA tournament.

“It’d be fun to see it happen now, because I think that would elevate us into the postseason,” she said.

The Blugolds will tip off at 7 p.m. Friday night. If they win and top-seeded Superior loses, they would host the championship game Sunday at 2 p.m. If Superior wins and the Blugolds win, they would travel there for the title game. The winner of Sunday’s game gets an automatic bid to the NCAA tournament, where the Blugolds haven’t been since 2012.