Head wrestling coach Jared Evans is back coaching after six months away from the sport he loves. 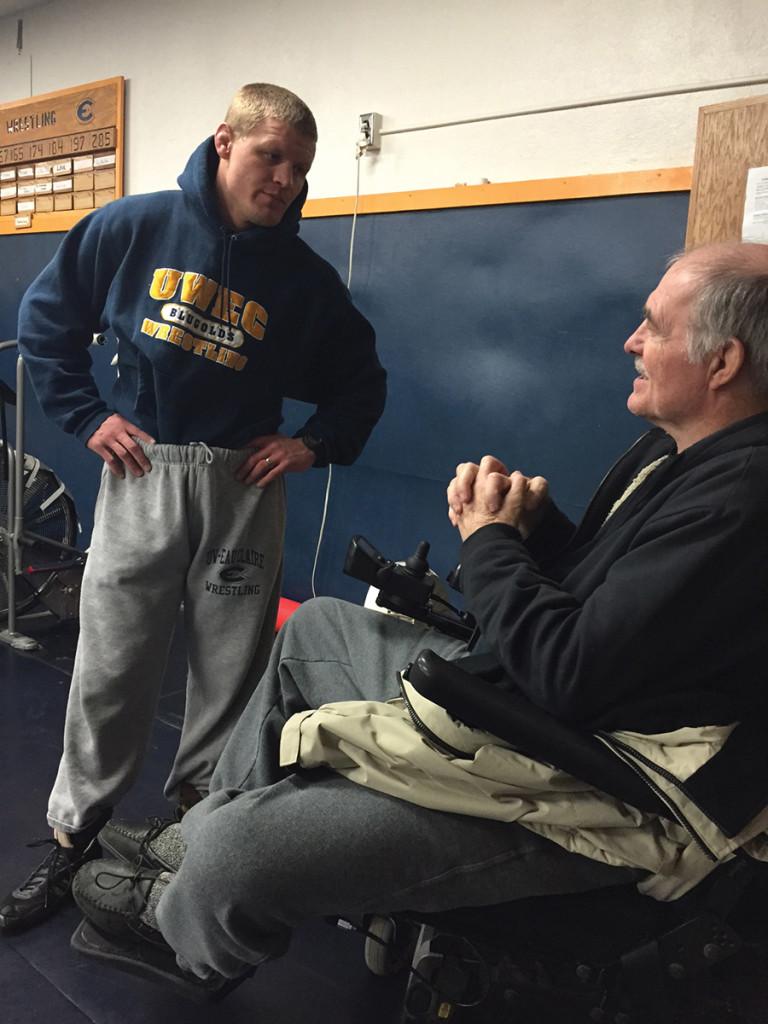 In January, Jared Evans was named head coach of the UW-Eau Claire wrestling and is now preparing for the WIAC Championships this Sunday. Last week Evans talked with Blugold Hall of Fame coach Don Parker prior to practice

It is around 4 p.m on a Tuesday, and head wrestling coach Jared Evans is ready to start a “challenging” and “intense” practice.  Prior to sending the UW-Eau Claire wrestling team into warm ups, he reminds the roster of 14 Blugold wrestlers that practice starts at 4:30 — no exceptions.

Everyone in the room nods in agreement, and Evans claps his hands together, signaling it’s time to begin.

The time clock is set to 10 minutes, and the wrestlers begin to jog around the room, increasing their intensity with each lap.  Evans watches on while possibly thinking over his practice plan or what to say next, but as each minute passes one thing is certain.

This is where he belongs.

A year ago, Evans was far from the mat. After graduating from Augsburg (Minn.) in 2007 with three All-American honors and two team national championships to his name, he joined the Auggies’ coaching staff as an assistant.

Evans said he has been around wrestling since he could crawl, and after five years on Augsburg’s staff, he decided it was time for a break.

“I had the itch to get out and do something different,” he said, “but last winter was the hardest of my life.”

Later in the year, Evans’ wife was named the head volleyball coach at UW-Stout and the two moved  to Eau Claire.

Evans wasted no time joining the Blugold staff as a volunteer, and the man who had been wrestling since he could crawl was back doing what he loved.

This past January, former head coach Steve Wozniak stepped down from the position, and Evans stepped in.

Director of Athletics Dan Schumacher said Wozniak was outstanding, but he saw that it was time to make a change, and Evans couldn’t have been more qualified.

“He is extremely articulate, he knows the sport and he is a champion himself,” Schumacher said. “When you spend five minutes with him you can tell the passion and knowledge is there. We are very fortunate to have him in a leadership role.”

Evans’s passion for wrestling is evident in just his first month as head coach, Schumacher said, and the results have shown on the mat as well.

Senior Mat Rieckhoff placed second this past weekend in the Don Parker open. He said his new coach has helped him and his teammates focus on their strengths and find more ways to score points while competing.

Despite the tough practices, Rieckhoff said he knows Evans is pushing them in preparation for a trip to nationals.

The Blugolds are in position to send four wrestlers to the national tournament, and the senior captain said though making it to nationals would be a great individual accomplishment, he’d rather see multiple underclassmen make the trip with or without him.

“It would be an awesome way to kick start what Jared is doing here.” Rieckhoff said. “If we can go into next season with two or three national qualifiers, that would be huge for this program.”

As Rieckhoff and the Blugolds ended their Tuesday practice, they exited the wrestling room drenched in sweat in preparation for the WIAC Championship this Sunday.

Evans said he wouldn’t be dreaming if he saw four wrestlers make it to nationals, and that no matter the finish, the future is bright for Blugold wrestling.