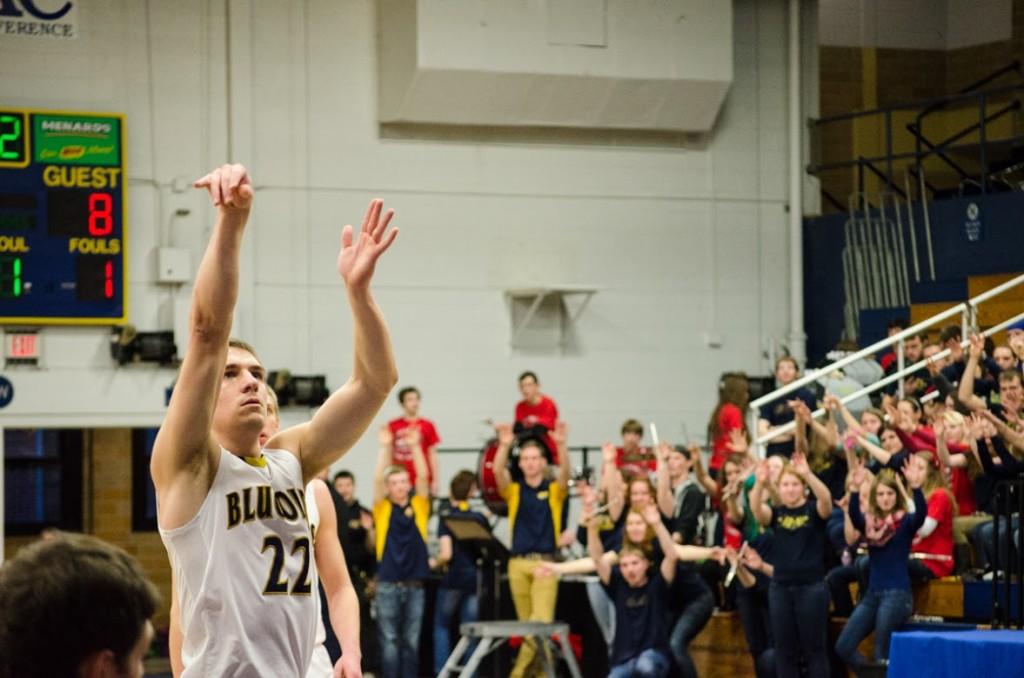 Senior Eric Effertz shoots a free throw Saturday when the Blugolds fell short to the Pointers.

Over the past few weeks, head men’s basketball coach Matt Siverling has stressed the importance of elevating his team’s defensive play. Saturday night inside Zorn Arena, the Blugolds showed up, but only on one side of the court.

Eau Claire shot 30 percent from the field in the 49-40 loss to No. 19 UW-Stevens Point and only 24 percent in the first half. Siverling said late in the game Point was more aggressive on offense and got stops when they needed them.

“It was classic game of runs,” Siverling said. “We got up by eight, but had two turnovers late and a missed layup by Tyson (Kalien) and when you don’t get a quality shot in three possessions against Stevens Point they can hurt you very quickly.”

Eau Claire was down 21-9 with 8:09 left in the first half before going on a 9-0 run to cut the Pointer lead to nine. Neither team scored a point in the final four minutes in what proved to be a closely contested defensive contest the rest of the night.

Junior Tyson Kalien opened the second half with back-to-back 3-pointers to give Eau Claire a three point lead, and seven minutes later a sophomore Jack Martinek cut through the lane for a layup that gave the Blugolds a 38-31 lead.

Eau Claire managed to score only two more points in the final seven minutes as the Blugolds were halted by the Pointers defensive and several near baskets that just didn’t go down.

“They are a pretty physical basketball team,” Siverling said. “I think this is maybe one of the better defensive teams with their size and strength. They really try and take you out of what you’re trying to do offensively.”

Siverling said the Blugolds battled and got most of the shots they wanted despite their difficult night shooting.

Eau Claire had their chances late to pull off what would have been a signature win for Siverling, and the Blugolds. Down 42-38, after a Jordan Lutz 3-pointer and a pair of free throws  from Austin Ryf, Eau Claire called a timeout with 58 seconds remaining.

Out of the huddle, Siverling drew up a play that gave Martinek his fourth basket of the game and brought the Pointer lead to two.

But seven Stevens Point free throws later the game was over and with the loss Eau Claire dropped to a record of 7-12 and 3-7 in conference play.