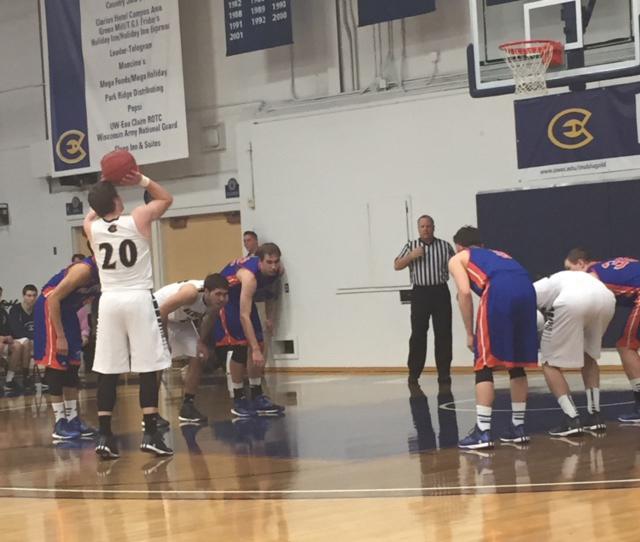 “Live by the three, die by the three” is a saying as old as the 3-point line itself. It’s a rule the UW-Eau Claire men’s basketball team has been playing by all year, and Wednesday night inside Zorn Arena, the Blugolds lived, defeating UW-Platteville 80-62.

Eau Claire dropped 11 3-pointers on the Pioneers and head coach Matt Siverling said the team’s ninth win of the year proved to be its most complete.

“If you look at the stats, and the way we play, the contributions we got from everyone on the basketball team, the way we defended, we did it for 40 minutes.” Siverling said. “We’ve done it for stretches, we’ve done it for games, but we just haven’t done it for an entire 40.”

The Blugolds spaced the court all night and let sophomore Jack Martinek create openings for himself and his teammates. The 6-foot-3 guard missed some layups in the first half, shooting 2-6 from the field, but in the second, he switched the script, missing only two of his eight attempts.

Marinek finished with 21 points, but Siverling said the stat that stood out to him the most was the team total of 15 assists — four of which Marinek accounted for.

There can be no assist without a basket, though, and Eau Claire shot a season-high 65 percent from the field, including Marinek knocking down half of his shots.

“He is a pretty tough match up because he can put it on the floor and go by anybody,” Siverling said. “Then he knocked down a couple threes. He struggled early, and we talked about it at halftime, but he came out and gave us a great effort in the second half.”

The combination of Marinek and junior Tyson Kalien’s 15 points caused problems for Platteville as the Pioneers like to start a taller lineup. Siverling decided to go with a short lineup to counter, and he said that decision proved to be a difference-maker in the win.

The lone post player in the starting lineup for the Blugolds was junior Jacob Kohner, and in 21 minutes of play, the 6-foot-9 big man scored 10 points.

The win puts Eau Claire in a tight race with UW-La Crosse and UW-Oshkosh in a race for the final two WIAC tournament spots.

“There is a lot that can happen between now and the end of the season,” Siverling said. “We aren’t in yet.”