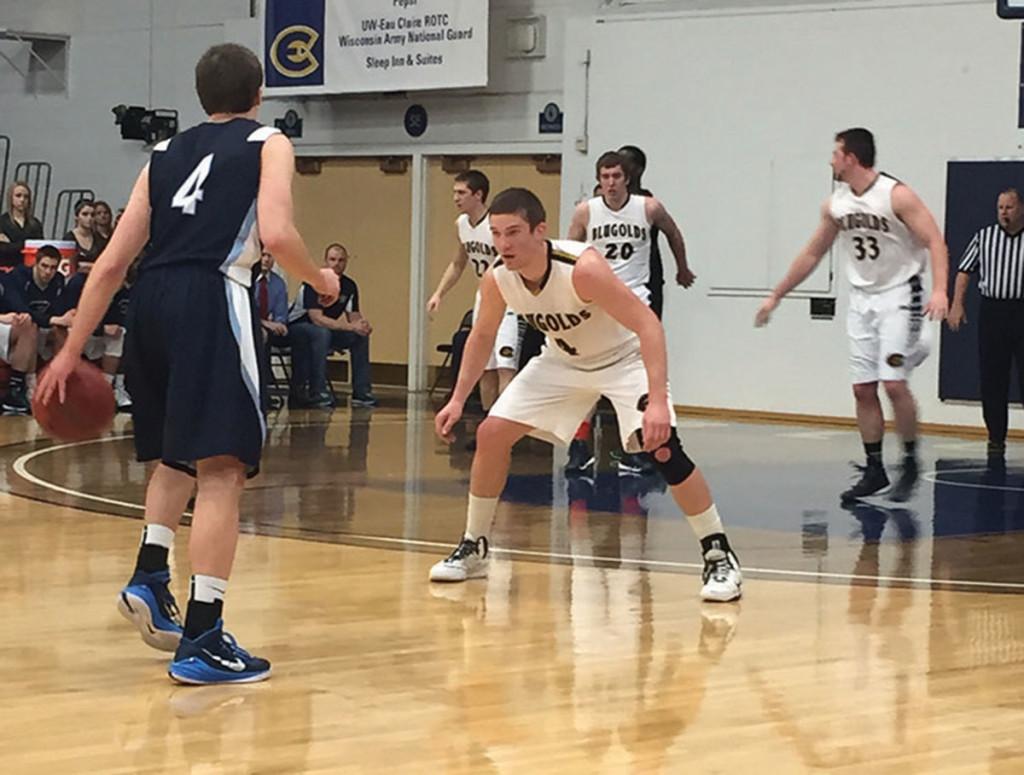 The defensive efforts of senior Lewis Mau and the Blugolds was enough to beat UW-Stout Wednesday night with a score of 69-64. Eau Claire will play UW-Stevens Point at 5 p.m. Saturday at Zorn Arena.

Siverling is the only collegiate head coach Effertz has ever had, and Siverling said it was great to see him step up and make shots versus a rival like Stout.

Heading into Wednesday night’s conference game against the Blue Devils, Siverling said it was time for his team to put together a complete effort on defense if they wanted to make a run at the WIAC tournament.

After holding Stout to 43 percent shooting and winning 69-64 the third year, head coach said the Blugolds finally showed up defensively.

Eau Claire forced the Blue Devils into fade away jump shots and off balance layups throughout the night and senior Eric Effertz said if they continue to play tough defensive they will be a difficult match for any opponent.

“We switched very well and we communicated very well,” Effertz said. “And if you can do that, then you can be a tough defensive team and eliminate a lot of the mistakes you do make.”

As a part the Blugolds’ defensive pressure, a nine-point halftime lead grew as high as 13 points after senior Lewis Mau scored two of his nine points on a fast break lay up at the 9:40 mark.

Stout called a timeout, and responded with an 8-0 run to cut the lead to five, but Effertz continued to add to what Siverling called a “career night”— single-handedly scoring seven consecutive points to put the game out of reach.

The Blue Devils tried to rally late and capitalized on missed free throws by Eau Claire, but the Blugolds hung on to snap their three game losing streak.

“We were fortunate to have a big enough lead where we could miss a few free throws and make the game a little more interesting, not something we want to do on a consistent basis,” Siverling said. “But we made stops down the stretch.”

On top of his 20 points, Effertz finished with  three assists and one rebound, while going 11-13 from the free throw line.

The Blugolds were in the bonus for much of the game, and Effertz said that meant he needed to go into attack mode.

“If they are coming and pushing up on us,” he said, “then I am trying to get a foul any way I can just to get to the free throw line.”

Unlike Effertz, junior Kurtis Moody did not need any free throws to reach double digits as he went 5-8 from the field for 10 points.

Prior to Wednesday night’s victory, Siverling said the team was in good spirits despite not being where they expected to be in the standings.

Before the season started, the Blugolds had conference tournament aspirations, but losing all conference guard Adam Hjelter to a season ending injury set Eau Claire back.

In Hjelter’s absence, players have had to step up on both sides of the court. Siverling said both junior Tyson Kalien and sophomore Jack Martinek have done just that.

Kalien is averaging 19.0 points per game in conference play, and Siverling said though the NCAA Division II transfer’s outside touch is exceptional, Kalien’s ability to make plays inside the arc has made him difficult to defend.

Martinek’s average of 11 points per game has helped give the Blugolds production off the bench, and Siverling said the 6-foot-3 guard is one of the few players he has that can create his own shot.

More importantly though Siverling said, the second year scorer has grown drastically on the defensive side since his freshman year.

Up next for the 7-11 Blugolds is a conference match up with UW-Stevens Point at 5:00 P.M. Saturday at Zorn Arena.