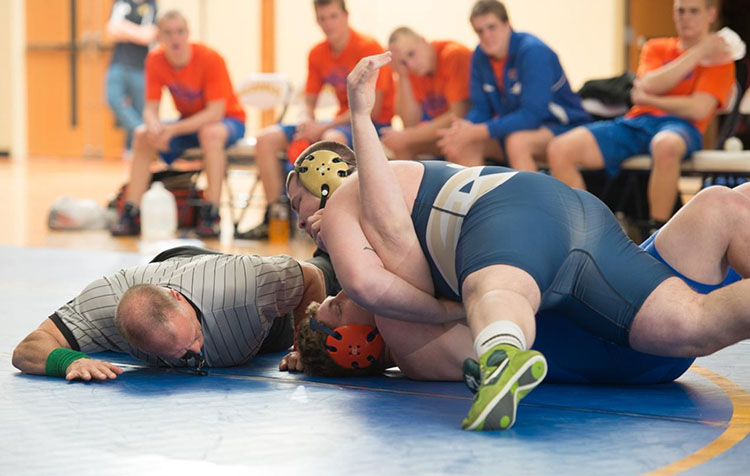 Sophomore Justin Karkula pinned UW-Platteville's Brandon Boyle to give the Blugolds their first WIAC victory since 2008.

They say good things come to those who wait, and for the UW-Eau Claire wrestling team, this could not have been truer than it was Thursday night.

Down 17 points going into the final three matches of its conference matchup with UW-Platteville, the Blugolds scored three consecutive pins and won their first WIAC dual since 2008, 24-23.

With all of his friends and family in attendance, the fifth-year senior pinned the Pioneer’s Michael Cole to spark the eventual Blugold run.

Rieckhoff said capturing a team victory in front of the most Eau Claire fans he has ever competed in front of is a moment he’ll remember for the rest of his life.

“Last night was the highlight of my entire wrestling career,” the one-time NCAA tournament participant said. “There is nothing like pulling off a big team win like that.”

Still down 11 points, Josh Cormican entered the circle and picked up right where his captain left off. The sophomore wasted little time as he pinned his opponent in 1:48 to earn six more points for Eau Claire.

With the score 23-18, the outcome of the Blugolds’ last home dual of the season came down to the final match.

Needing a pin for a Blugold win, sophomore Justin Karkula squared off with Brandon Boyle, hoping to bring Eau Claire its first conference win of the year.

The UW-Whitewater transfer pinned Boyle last year, but that only slightly eased the nerves of the Blugold bench as they watched their 285-pound wrestler battle.

Their nerves didn’t last long though as 73 seconds later, Karkula pinned Boyle to give Eau Claire the narrow 24-23 win.

“I knew what I had to do at the end to win the dual,” Karkula said, “There were a lot of nerves but at the end, if the match was close, I knew it was going to come down to me.”

Twelve of Platteville’s 23 points came via forfeit as the Blugolds are battling injuries on their roster.

All-American Nathaniel Behnke broke his hand last month and has been sidelined ever since. Rieckhoff said the two-time national qualifier is working to get healthy along with a few other teammates.

Eau Claire has a long history of injury problems dating back to Rieckhoff’s first year on the team, but he said if they can get healthy, there is no reason why they cannot compete with anyone in the conference.

“Once we are giving up less forfeit points and if we keep grinding,” Rieckhoff said, “then I think as a team, we have real potential to make stuff happen at the regional tournament.”