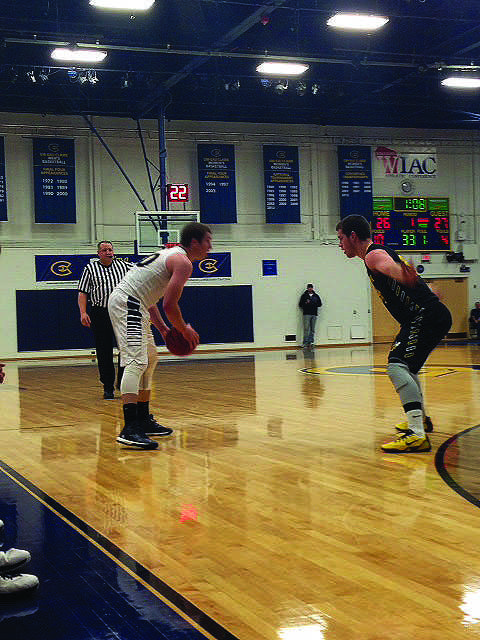 Junior Tyson Kalien leads the Blugolds in scoring with just over 13 points per game. He was coming off the bench earlier in the season, but an injury to junior Adam Hjelter forced the NCAA Division II transfer into the starting lineup. - Photo by Ellis Williams

As a season progresses, teams tend find their identity and rhythm, but Wednesday night, a 67-58 loss at home to UW-Superior left the UW-Eau Claire men’s basketball team with more questions than answers.

Already missing their all-conference guard Adam Hjelter, the Blugolds lost yet another former all-conference player midway through the second half when senior Lewis Mau came down awkwardly on his ankle after attempting a jump shot in the lane.

Mau did not return to the game, and head coach Matt Siverling said Mau’s long term status is unknown. As a result of the recent injuries the Blugolds are facing, Siverling said the health of his team is on the forefront of his mind.

Down 53-45 and missing two captains due to injury, Eau Claire tried to rally not only for its fallen teammates, but also for a lead. Junior Tyson Kalien knocked his fourth 3-pointer of the game immediately following Mau’s exit.

Two and half minutes later, after multiple defensive stops by both sides, freshman George Diekelman buried a three to bring the Blugolds within three.

“George is a winner, he comes from a winning program,” head coach Matt Siverling said. “ He has really been practicing well so we thought we’d give him a shot and we needed some energy, we needed a spark off the bench.”

Diekelman’s spark was not enough to ignite Eau Claire to their first conference win as the Blugolds were outscored 14-7 in the final four minutes.

Eau Claire struggled to find scores outside of Kalien, who finished with 16, as the team shot a mere 37 percent and failed to notch a double digit scorer outside of the Chippewa Falls High School graduate.

Kalien also lead the Blugolds in minutes played as he only missed six minutes of action.

On the defensive end, the Blugolds had no answer for Yellowjackets’ leading scorer, Brian Lindblom, as the junior shot made nine shots for 22 points, including three 3-pointers.

Eau Claire only forced four Superior turnovers while it turned the ball over 11 times, which lead to 18 Yellowjacket points.

The Blugolds have a quick turnaround as they are home at 7 p.m. this Saturday versus St. Norbert and then they hit the road for the two-day Tampa Bay Tournament (Fla.).