Women’s hoops amping up the defense in conference play 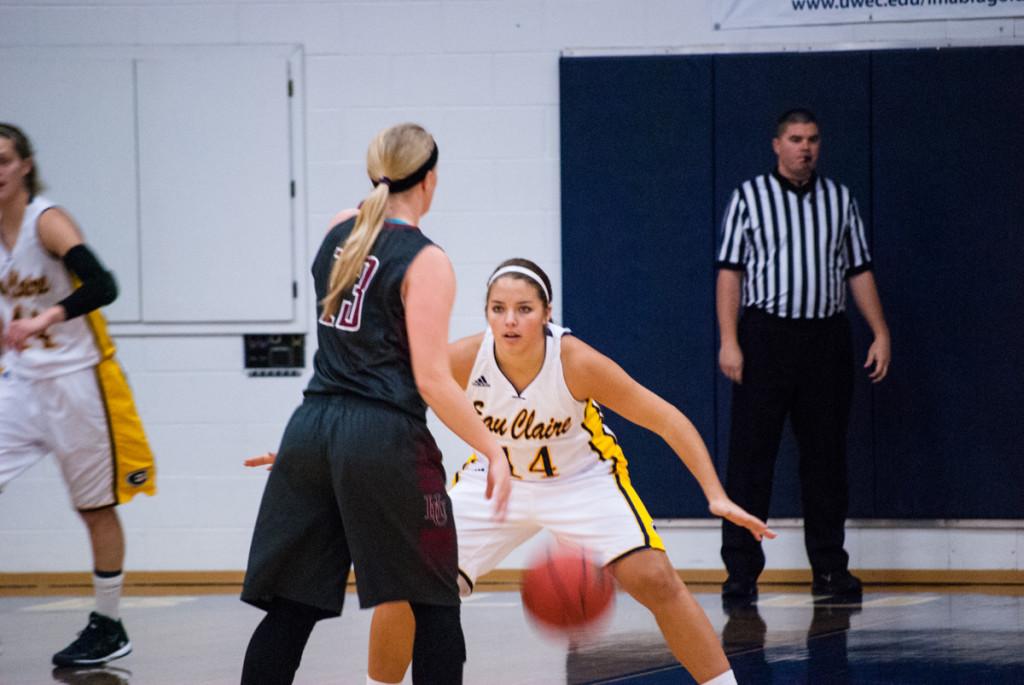 Sophomore guard Abby Midtlien was one of four Blugolds in double figures Saturday against the Warhawks. - Photo by Anna Mateffy

Two games into the 2014-2015 WIAC conference season, those pieces are all fitting into place as her Blugolds held their first two conference opponents to just 59 points and 36 points, respectively.

They also lead the league in blocked shots at 5.88 per contest. Five players stand at least 6-feet tall, and four get significant playing time to add to that statistic.

“(Senior) Rachel Egdorf, (sophomore) Ellen Blacklock, (sophomore) Alleah Voigt and (junior) Madison Johnson all have the ability to be a factor in the zone, and it impacts a team’s game plan when they can’t get easy shots in the lane,” Englund said.

Saturday, the Blugolds held UW-River Falls to 28 percent from the floor, blocked five shots and only sent the Falcons to the free-throw line eight times.

Egdorf said a big area of improvement for the post players this year has been being able to alter the shots without fouling.

“It’s one of those things that instead of taking fouls, if someone is dribbling into the lane, we just funnel them into us,” Egdorf said. “And we have practice blocking each other’s shot.”

While the post players all clog up the bottom of Englund’s 2-3 zone, quick and athletic guards and forwards take up the top and sides.

Junior guard Teenie Licthfuss is the third in the WIAC at 2.38 steals per game ,and senior forward Courtney Lewis is seventh at 1.63 swipes per contest.

But of course, defense doesn’t put points up on the board. However, defense can create opportunities on the other side of the court, even if the baskets aren’t coming, Egdorf said.

“Defense can make your offense,” Egdorf said. “It’s one of those things that if shots aren’t falling, you can pick it up defensively. That brings a ton of momentum on the offensive end.”

Eau Claire has gotten a lot of transition 3-pointers because of forcing turnovers and blocking shots. The Blugolds are first in the conference in 3-point percentage and makes per game.

While Egdorf said there are some things on offense, like shots not falling or officiating, that are uncontrollable, defense is something they can control. By doing this, she and her teammates look to continue to control their own fate in the WIAC and bring a title back to Zorn Arena.