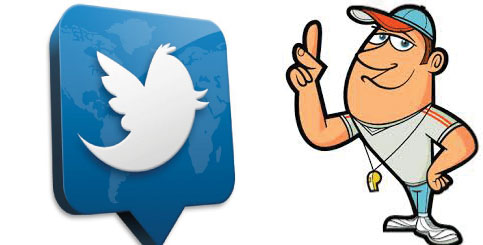 To say Twitter has taken over the world may be an exaggeration, but it can’t be denied social media has become a staple of the UW-Eau Claire athletic department.

Over the past year, every athletic team on campus has joined the world of Twitter as a campus-wide campaign that Chancellor James C. Schmidt and Director of Athletics Dan Schumacher commissioned.

Some Blugold athletic programs and coaches were on social media prior to Schumacher joining Eau Claire early this year, but it was the athletic director’s vision to build the Blugold sports brand through social networking.

“Social media is a huge way to communicate with your donors, fans, community and alumni,” Schumacher said. “In athletics, especially with us in Division III with limited resources and dollars, we’ve got to use every avenue we can to market and message to our fan and support base that we can.”

Eau Claire has used social media to relay instant information to Blugold fans near and far as the athletic department’s offical Twitter account has over 2,700 followers and provides coverage of all university sports.

Even the chancellor’s continually growing social media influence on campus has helped generate support for Blugold athletics, Schumacher said. He credits Schmidt for the almost 1,500 people who showed up to the volleyball game last week in Zorn Arena.

The day before the match, he simply tweeted his near 2,000 followers urging Blugold Nation to cheer on their classmates.

University athletics does not only use social networking to reach current and former students. Twitter has become an effective way to reach future Blugolds as well.

“Social media, especially from a recruiting standpoint, that’s how we’re connecting indirectly with our recruits,”  Wudi said. “We can’t follow recruits, but they follow us.”

Dan Schwamberger, head cross country coach, said he has also found Twitter to be an effective way to communicate with recruits by showing athletes specific workout videos and techniques.

Schumacher and the Blugold coaches are aware they need to adjust to the times, and head football coach Todd Glaser said joining the social media phenomena was a must in order to stay connected to today’s generation of youth.

“It’s kind of where everybody is going with the recruiting and stuff,” Glaser said. “Kids are on Facebook and Twitter, and last year our recruiting coordinator (Ben Halder) suggested that we get on it.”

With Schumacher’s push for coaches to join Twitter also comes the revamping of the Blugold athletics website. The new design debuted earlier this year with a simple, user-friendly layout, which Schumacher had a hand in crafting.

New this year, after a game or match, a Blugold coach must record a brief video recapping the results of the game, and the video is posted on the website’s home page.

Schumacher said mastering social media and remodeling the athletic website is his attempt to build the university’s image.

“We are branding ourselves in a certain way and curtailing it to our customer,” he said, “which in my opinion is our perspective student athlete.”

-Nick Erickson, Austin Mai and Meghan Hosely contributed to the reporting of the story