Men’s basketball heats up in second half for win 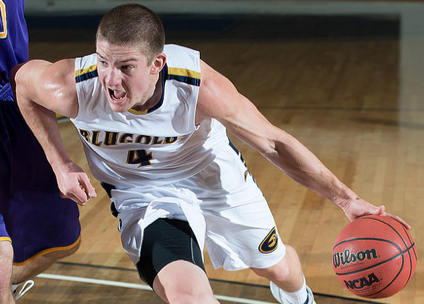 One night after the up-beat tunes of Ingrid Michaelson filled Zorn Arena, the UW-Eau Claire men’s basketball team hosted Viterbo University in its home opener in the same venue.

The roars of the Blugold marching band replaced Michaelson’s melodies, but unlike the solo act of the night before, the 64-57 win for Eau Claire was far from a one-man show.

Head coach Matt Siverling said he hopes the depth he has at his disposal will continue to be a strength along with outside shooting.

Down 30-23 at half, Eau Claire came out firing as junior Adam Hjelter knocked down a 21-foot 3-pointer to cut the V-Hawk lead to four. Three minutes later, St. Cloud State (Minn.) transfer Tyson Kalien connected on three consecutive 3s for a 35-32 Blugold lead.

“Tyson came out and hit a couple,” Siverling said. “I think on the (fourth) shot he took he started running to half court because he thought it was going down, but you have to love his confidence.”

Kalien scored nine of his 11 points in a under 90 seconds, and Siverling said his staff needs to find ways to get the junior newcomer more shots going forward.

A hyped Zorn Arena crowd got even louder after sophomore Kevin Jensen chased down a would be Viterbo layup and pinned the shot against the backboard at the 12 minute mark.

Three and a half minutes later, V-Hawk forward David Shepard rose up for a dunk to cut the Blugold lead to one, but Jensen responded with a near slam of his own. He was fouled on the play.

Jensen, who missed most of last year with a knee injury, made both free throws en route to a 12-point performance.

“I’ve been waiting for a year to play in front of this crowd,” he said. “It is so much fun when Zorn gets rocking like that.”

The Blugolds were out rebounded 43 to 29, and Siverling said in the first half, his guys struggled to find a post presence. But in the second half, they were able to feed the blocks a few times with post-up scores from both Jensen and senior Lewis Mau.

“Lewis knows that this is it for him, so he has really been a guy we can lean on down the stretch,” Siverling said. “He just goes out there and competes, and I think that is contagious.”

Mau notched a double-double with 11 points and 10 rebounds on four of seven shooting.

Viterbo had a chance to tie the game with 28 seconds remaining, but senior Alex Diciaula missed, and Hjelter secured the potential game sealing rebound.

He was fouled immediately and buried both free throws to put the game out of reach.

The Blugolds look to bring their fan’s energy with them this weekend as they travel to Wheaton (Ill.) for a two-day tournament.