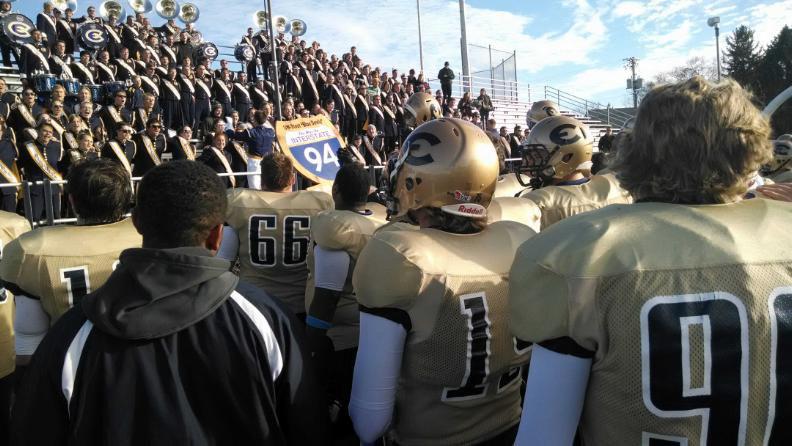 As a native of Red Wing, Minn., junior Joel Newman has to drive through Menomonie every time he comes to Eau Claire.

For at least a full calendar year, it will be extra sweet for the Blugold starting quarterback, who orchestrated a masterful game-winning drive Saturday at Carson Park to knock off rival UW-Stout 20-17 and reclaim bragging rights in the War on 94 game.

The win was the first of the year for UW-Eau Claire and snapped a seven-game losing streak.

“We were definitely due,” Newman said. “To get that win and get the trophy back in Eau Claire is huge for us.”

After missing on a second down pass from the four-yard line to junior Lucas Emmerich, Newman went right back to his 6-foot-5 tight end on a third-down fade to cap the drive off with the go-ahead touchdown.

“He’s a big target, strong kid and very athletic, and he’s quick enough where he can make a play on the corner,” Newman said of Emmerich. “I looked to the play side and saw Matt (Knapp) had beaten his guy, but they left a couple of guys on him, so somebody couldn’t play underneath Lucas.”

The Eau Claire defense, which only allowed 11 first downs and a total of just 227 yards of offense, didn’t let the Blue Devils past midfield in the final three minutes to hang on for the victory.

The Blugolds had to fight through some adversity in Saturday’s contest, and for the first time this season, they prevailed through it.

After taking a 13-10 lead into the halftime locker room, Newman threw two interceptions in a row, including one that was returned for a touchdown.

Instead of getting down, Newman, found a way out of his third-quarter funk to complete his best career outing and second-ever win as a starting quarterback.

“It shows a lot of character for that kid to throw two picks and come back and win a game-winning drive,” Knapp said.

Newman finished the game 30-of-47 passing with 280 yards and three touchdowns to lead the biggest offensive output of the season for the Blugolds.

But he didn’t do it alone. He got great games from his receiving corps with Knapp and Emmerich leading the way.

Both players had over 11 catches and over 100 yards receiving. Knapp had 125 yards and two scores, one on a 23-yard bubble screen in the first quarter and the other on an out pattern from nine yards out with 39 seconds left on the clock in the second quarter. Emmerich had 101 yards receiving, including his big game-winning catch.

Glaser said earlier in the week that his team had some of its best practices in preparation for the Stout game, and he also said Saturday’s win showed the true character of his squad.

“The first seven games didn’t go our way, and a lot of kids would have just given up, but our kids didn’t,” he said. “It’s always nice to win.”

Knapp expects the same type of focus this week as the Blugolds prep to hit the road for a bout with UW-Oshkosh.

“We’re just trying to keep train rolling,” he said. “I think the energy is going to up and people are going to more confident, so hopefully we can carry that into Oshkosh.”

Kickoff is 2 p.m. next Saturday from JJ Keller Field at Titan Stadium.