Building on a foundation 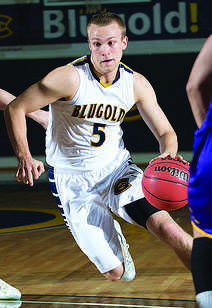 WINNING THROUGH LOSING: Adam Hjelter led the men’s basketball team in scoring last season, and he said the difficulties of years past has taught him and his teammates the keys to winning. - Submitted

What a difference a year can make.

Twelve months ago, the UW-Eau Claire men’s basketball team was unsure of its identity as a unit.

Its head coach was in his second year here, and the roster was filled with underclassmen and a handful of juniors.

But with young teams come the opportunity to build a foundation, and this year, head coach Matt Siverling said his team is eager to take the next step.

“Last year we learned a lot about who we were as a basketball team,” Siverling said. “Hopefully the experience we have now will allow us to be consistent at a high level this season.”

The Blugolds lost zero players to graduation last year and return 14 from the 2013-14 season, in which Eau Claire went 10-15 and finished eighth in the WIAC standings.

Eau Claire will rely on the guard play of seniors Lewis Mau and Eric Effertz along with junior Adam Hjelter to push, distribute and score the basketball. These are three duties the seasoned backcourt trio is accustomed to.

Mau was all-WIAC honorable mention in 2013 ,and Hjelter lead the team in scoring last year with 15.5 points per game.

Effertz has been a primary ball handler under Siverling for his entire college career, and he said he can feel how different this year is compared to past years.

“We all are just more comfortable with what we are doing,” Effertz said. “(Siverling) really has put a lot a trust in us older guys this year.”

A big difference this season is the expanded leadership role the upperclassmen have taken on, Siverling said. In years past, they were more lead-by-example guys, but after three years in the Blugold program, Siverling is able to pass some of his coaching responsibilities to his veteran players.

Hjelter, the third-highest returning scorer in the conference, has become more of a vocal leader already this year, he said, and despite a narrow 83-73 scrimmage loss last week to Winona State University (Minn.), he thought his teammates showed growth on both sides of the ball.

“We competed with a very good DII team, but there are a lot of things we have to work on,” Hjelter said.

It is no secret the 6-foot guard will demand the attention of opposing defenses all season due to his scoring ability, but often last year it was defensive team break downs which kept the Blugolds out of games.

Eau Claire ranked second-to-last in scoring defense last year, a number Hjelter said must improve. A large number of the points the Blugolds gave up came in transition, and a way to stop opposing teams from scoring fast break layups is to have fresh legs that can keep up the pace.

Last year, Siverling was forced to give several players large amounts of minutes due to a lack of depth. This year, they plan on a deep rotation being a team strength.

Along with improving on defense, Siverling has stressed the importance of establishing an inside post presence. It is not only to set a specific tone but also to open up perimeter shots for his free-to-fire back court.

The Blugolds will have an opportunity to refine their strengths as well as improve on their weakness against what Hjelter called one of the toughest non-conference schedules in the nation.

“Heading into conference, once we get through the heat of our non-conference, we want to put ourselves in a position to make a run in the postseason,” Hjelter said. “We think we have a shot at the conference because we have a good blend of talent and experience.”

The Blugolds’ season tips off at 7 p.m. Sunday at St. Thomas University (Minn.).