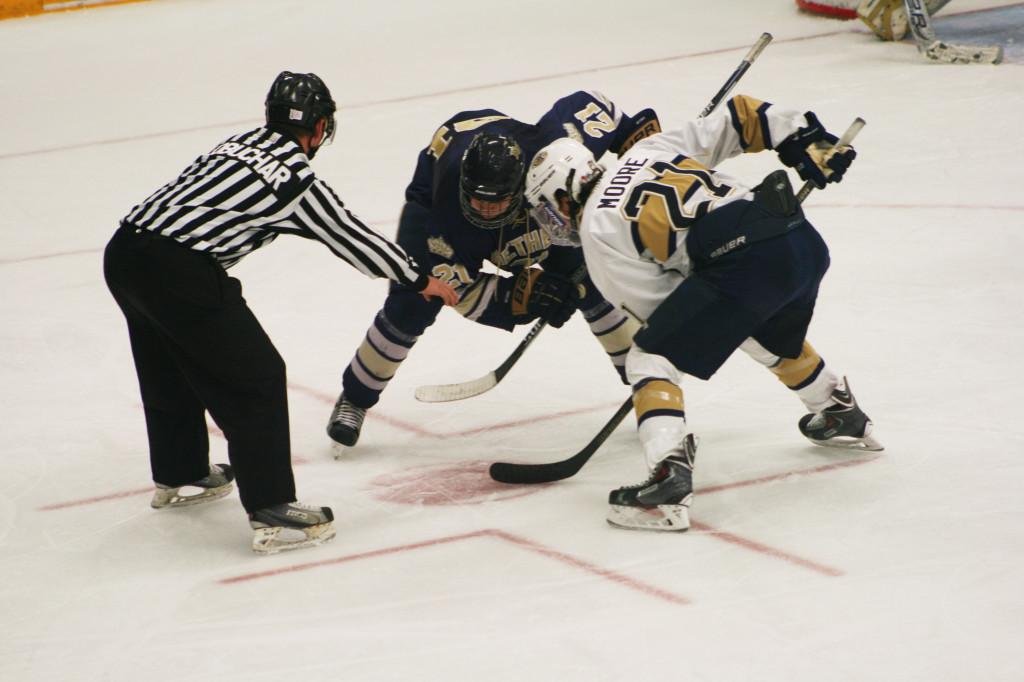 Patrick Moore faces off in a win against Bethel (Minn.) Saturday night.

With his arm in a sling and ice on his shoulder, the senior forward still had a smile on his face.

In a 6-3 win against Bethel University (Minn.) at home, the team-proclaimed scoring wizard worked his magic and found the back on the net twice. And after recording two goals and an assist over the weekend, Andersen made it clear he’s more invested in the team than a one-man magic show.

“Guys are playing with confidence in the offensive zone,” Andersen said. “We had some freshmen step up, obviously Mac (Jansen) had two goals as well.”

Even with junior and sophomore forwards Ethan Nauman and Brandon Wahlin scoring goals, the Blugolds were critical of their performance.

“This game we had some bad gray-zone turnovers,” Andersen said. “We have to be smarter with the puck, getting it out of the defensive zone and into the offensive zone. Just simple plays.”

Nauman gave thanks to not only his teammates leading up to his goal, but the nearly 1,400 attendees at Hobbs Ice Center Saturday night.

“Our fans were awesome,” Nauman said. “I give a lot of credit to my linemates; they played real well. They found me in the open spot and I just happened to get a good shot off and the puck’s going in for me right now.”

“Our defense played well and were able to get our forwards the puck,” Nauman said. “Our forwards have a lot of speed this year so we’re able to cycle the puck down low and find open guys.”

Against the Pipers, the Blugolds ended the first period scoreless down by two goals. Coming back from that deficit is what Nauman said the team needed to get rolling.

“We had come back from behind a couple of games already,” Nauman said. “We had a slow start, but after the first we came back strong.”

During the next two periods, Eau Claire’s defense held Hamline scoreless while Eau Claire’s offense lit up the scoreboard.

Nauman and sophomore forward Jason Eddy put the game out of reach after each scoring in the third period for the 5-2 win.

This upcoming week may be one of the most crucial on the Blugolds’ schedule as they will face reigning national champion No. 1 St. Norbert 7 p.m. Tuesday in De Pere.

Andersen said his injury appears to not be very serious and with some rest, more ice and Ibuprofen, he should be ready for Tuesday’s top-10 showdown with the Green Knights.

“Our goal is to get a good warm-up and get out there and get the first period,” Andersen said. “We have the skills so if we make the smart, simple plays it should go a long way.”