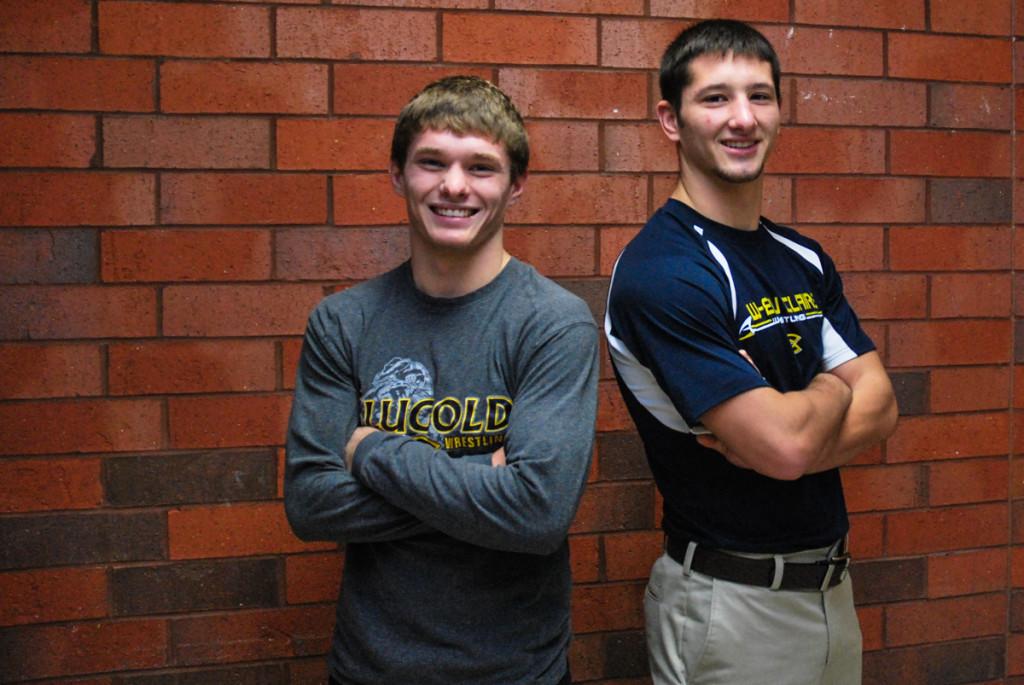 When brothers Ryan and Nathaniel Behnke’s senior wrestling seasons at Bruce High School ended in identical fashion – with fourth place finishes in their respective weight classes – the two were unaware of how completely different their collegiate careers would start.

The following year, the Behnke’s enrolled at UW-Eau Claire and joined the wrestling team. One of the brothers was ready to start his Blugold tenure, but the other was not physically healthy enough to take the mat.

This marked the two contrasting paths the twin brothers were headed down.

Ryan Behnke, the older brother by four minutes, tore his labrum at the state tournament. As if one surgery wasn’t enough, he also had his meniscus repaired that summer.

Nathaniel Behnke went on to wrestle without his brother for the for the first time in his athletic career as Ryan Behnke took a medical redshirt for the 2012-13 season, meaning he would not lose a year of eligibility.

Unable to physically push Nathaniel Behnke in practice, big brother aided his younger sibling from the sidelines when he could, and as a freshman, Nathaniel Behnke claimed All-American honors.

Then five weeks into the 2013-14 season, the injury bug bit Ryan Behnke again as he tore the same meniscus he did in high school.

After three surgeries in two years, he has had plenty of reasons to walk away from competition, and despite people close to him telling him to give it up, the small-town Wisconsin kid just won’t quit.

“I cannot imagine myself not competing, because I’ve done it my whole life,” Ryan Behnke said.” It just feels like something I have to do.”

Nathaniel Behnke made his second consecutive trip to nationals, and his brother said witnessing his brother’s success has helped fuel him through his recovery.

Also aiding him was the fact Ryan Behnke was not alone on the injury list last year. Senior Mat Rieckhoff had to sit out his last season due to an LCL tear and a lingering hamstring tear.

Rieckhoff, a captain this season, said he could relate to the frustrations Ryan Behnke was going through, and it was nice having a teammate on the road to recovery with him.

With the wrestling season set to begin this weekend, the Behnke’s and Rieckhoff are ready to compete.

The Blugolds have been training since the start of the semester, and Rieckhoff said having the Behnke’s both competing in practice adds a special element to their team.

“Once things start to get serious …  Sometimes, like brothers do, they will get frustrated and get after each other a little bit,” said Rieckhoff. “It just adds to the family dynamic our team has because they share that friendship and brotherly bond.”

Nathaniel Behnke said his brother is a source of motivation for him as he prepares for his junior season.

The two time all-conference wrestler has 82 career wins and said he hopes to reach 100 by Christmas. Ryan Behnke, who hasn’t even wrestled 20 matches for the Blugolds, said his focus is on staying healthy, then securing a starting spot and hopefully earning a trip to nationals.

The road to 100 is on the mind of Nathaniel Behnke, but as an upperclassman he said he has stepped into a leadership role this year. Because of that he is eager help his team by guiding the underclassmen and supporting his teammates.

Since the third grade, the Behnke brothers have been encouraging each other on and off the mat, and the little brother said that will continue this year.

“I try my best to help him out and keep him going,” Nathaniel Behnke said. “I want to get him to do his best.”

One man who has gotten the best out of the Behnke brothers is Blugold assistant coach Jeffery Peery.

Peery has been coaching the two brothers since third grade and was their head coach at Bruce. He said they were the hardest working kids he has ever had come through his wrestling program, and he credits the brothers’ family background and their competitive spirits for the wrestlers they’ve become.

“Once they step off the wrestling mat for the last time and they become successful members of society, … then I can look back and say my job as a coach is complete,” Peery said.

The long time coach of the Behnke’s said he has experienced the highs and lows of both of their careers. From watching them wrestling at state tournaments to helping Ryan Behnke decide to continue his wrestling career.

Through all the adversity his wrestlers have faced, he said if the Blugolds take the words of the coaching staff  to heart, then this season could be an exciting one.