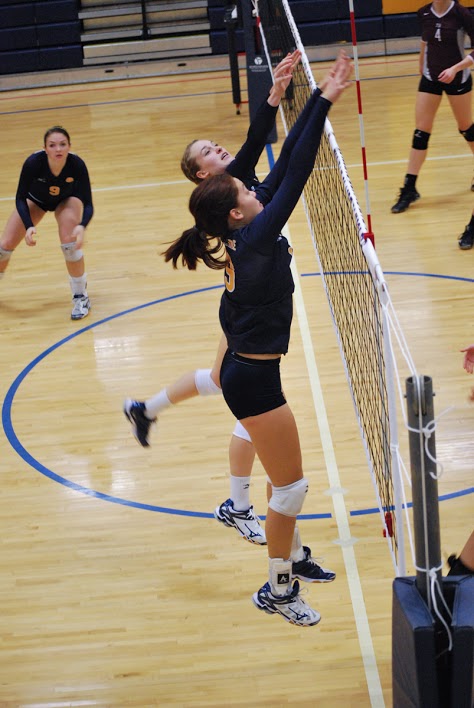 Senior Alexis Wong goes up for a block in the Fall Classic held last Friday and Saturday.

Last weekend, the 11-13 UW-Eau Claire volleyball team prepared for the Fall Classic home tournament knowing it needed wins to move toward to the conference championship tournament.

Standing at seventh in the conference, Eau Claire was on the wrong side of playoff eligibility.

Head coach Kim Wudi said her players and coaches had a sense of urgency, believing this team had underperformed to its expectations to this point in the season.

The team needed to limit its mental errors and force every team to play its fast tempo to return to what Wudi said is the team’s best system.

Senior Megan Tracy executed a kill with the score tied at 13 to earn her team the potential game-winning serve. After the serve the Tigers committed an attack error, giving the match to Eau Claire.

Senior Alexis Wong said Trinity was a tough opponent, but when they beat ranked opponents, they’re reminded of how strong their team is.

“Trinity has beaten a lot of good teams,” Wong said. “It was a tough match, but we played better, and that goes a long way when you’re playing ranked teams.”

“We couldn’t get the ball to the net,” Wudi said. “Our passing broke down completely.”

Wudi said especially when an All-American is on the other side of the net, the team needs passing to be on point for their offense to run efficiently.

Both teams were close in errors with Millikin at 21 and Eau Claire at 19, but Millikin recorded 62 kills against Eau Claire’s 42.

Wudi said she liked the way her team finished the weekend and hopes it will take the lessons it learned into the conference matchups remaining on the schedule.

Eau Claire plays at 4:30 p.m. Saturday at University of Minnesota-Morris and at 7 p.m. next Wednesday against UW-Stout at home.