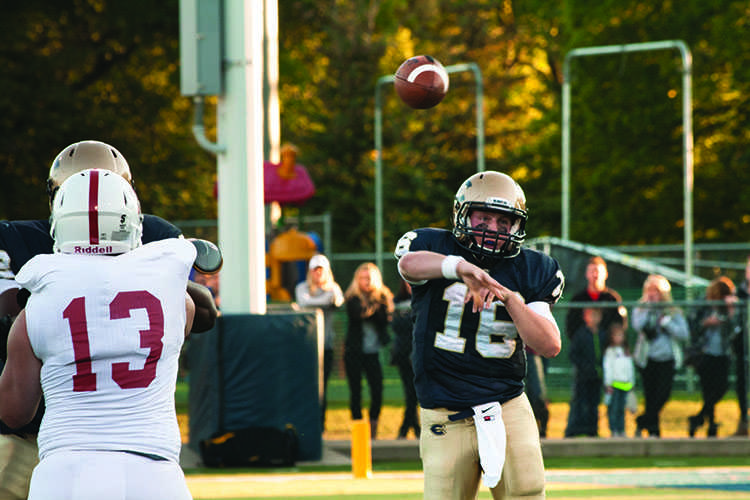 Homecoming is always filled with a lot of energy and entertainment.

Expect nothing less Saturday at Carson Park as the high-flying offense from UW-Platteville comes to town to take on the Blugold football team.

For those who enjoy spending Saturdays sitting on the couch and watching college games on television from 11 a.m. to midnight, the Pioneers are Division III’s version of the Oregon Ducks.

In 2013, No. 13 Platteville was third in the country in terms of passing offense at 348.8 yards per game. They also don’t huddle in order to run as many plays as possible.

A year ago, the Pioneers scored a 49-27 win against Eau Claire behind 442 yards through the air and seven passing touchdowns.

Even though he was second string a season ago, Platteville’s current starting quarterback Bryce Corrigan led the Pioneers to an 8-2 record in 2012.

Glaser knows he has his hands full with the potent offense.

“They’re going to spread you out, and try and get their athletes into space,” Glaser said. “They don’t really have a kink in their armor, so to say.”

But North Central (Ill.), which eliminated the Pioneers in the second round of the NCAA tournament in 2013, found some kinks by holding them to just seven points on Sept. 20.

By watching the film, Glaser said North Central’s secondary ran a lot of different coverages to frustrate their passing game. But ultimately, he said it’s going to come down to fundamentals to keep Platteville’s down-field attack at bay.

“It’s going to come down to us doing a great job of tackling, and we’ve put a lot of emphasis on that this week,” he said.

The Eau Claire defense is coming off a rock-solid performance against Wheaton (Ill.) two weeks ago when it held the No. 19 Thunder to just 17 points.

And coming off a bye week, the injury-ridden Bugold offense looks to gain some key components back and rebound after being shutout by Wheaton.

Junior wide receiver Chris Cummings said the offense will stick to the same approach it always does. which is all about grinding the opponent.

“We go out and get what the defense gives up,” Cummings said.

The Pioneers’ athleticism doesn’t end on the offensive side of the football as their defense makes its plays by flying around the field and creating turnovers.

Cummings said the Blugolds are prepared for what is sure to be an exhausting contest because of the practice structure they have.

Eau Claire practices in the mornings from 5:55 a.m. to 7:15 a.m., so the short time they have on the field is much more intense than it would be with a longer practice.

“We try to go every practice at game speed, it’s really high-energy,” Cummings said. “The most important thing we have been working on is conditioning and pursuit drills.”

The Blugolds will need every bit of that energy to keep pace with Platteville. But after spurts of sticking with three other nationally ranked teams in the non-conference slate, Glaser expects his team to give a full-game effort for Homecoming Saturday.

“It’s important we come out and play our type of football for four quarters,” he said.