Back to back shutouts happen for the first time since 1975 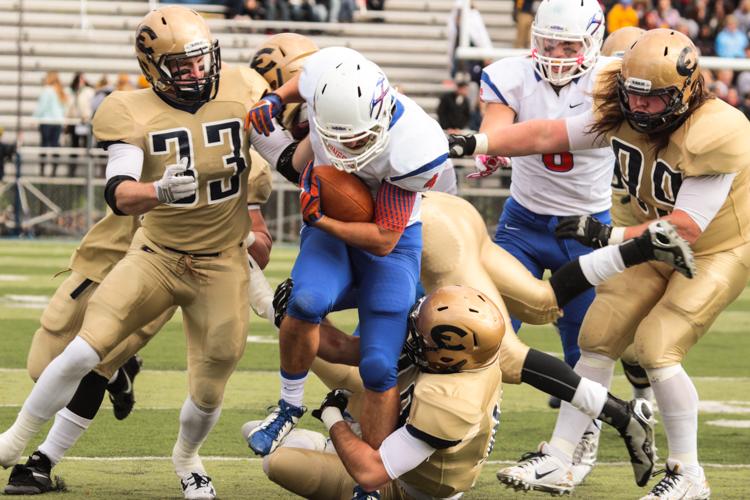 It was almost like watching an old episode of Tom and Jerry. But this time, the mouse couldn’t escape the cat.

UW-Platteville methodically drove 70 yards in 16 plays and eight minutes in the game’s first drive, and then pounded the UW-Eau Claire football team with big play after big play to leave Carson Park Saturday with a 49-0 win over the Blugolds.

The Pioneers converted all five third down attempts in that first drive despite only having one play gain more than five yards as they felt out what the Blugold defense was giving them.

They figured it out and pounced on it, scoring 28 second quarter points and putting the game out of reach early for the struggling Blugold offense, which was shut out for the second straight week.

The Pioneer quarterback, Bryce Corrigan, had four touchdown passes of 25-plus yards. He finished the day with 283 yards of passing and five touchdowns despite not playing the entire fourth quarter.

Eau Claire gave up 441 yards of total offense while only netting 131 of its own. Platteville also scored a touchdown on special teams.

“It wasn’t one phase or one position; it was all of them,” head coach Todd Glaser said about the keys to the loss. “It’s not lack of effort, we’ve just to play a bit better mentally right off the get go. We can’t have it snowball like that.”

The Blugold offense couldn’t get anything going, which has sort of been the story of the season for Glaser’s squad. Eau Claire has only scored 24 points in four games, and 17 of them came in one.

After a turnover, the Blugolds switched some things up on offense by bringing in Joel Newman at quarterback. He finished the day 7-for-13 but only for 29 yards. Starter Mark Munger, who has two great games this year, threw three interceptions on the day.

“With the quarterback position, that’s the easiest to take out to see if you can get a spark,” Glaser said. “But we never had a spark all the way through the game.”

Defensive lineman Jake Safstrom, who had two sacks on the afternoon, said it was an exhausting game and that the Pioneers wore them down.

“We were on the field a lot,” Safstrom said. “It’s a lot for the D-line and the whole defense, actually.”

The lopsided affair was the third worst loss in school history.

Platteville head coach Mike Emendorfer wanted his team to establish itself early on after the nationally ranked Pioneers fell in their previous game.

He said he was impressed with a lot things he saw from the Blugolds on film, but it was just one of those times where it seemed nothing went right.

“Eau Claire is a good football team; I think we just caught them on the wrong day,” Emendorfer said.

The Blugolds will have to find the right way soon as it doesn’t get any easier in the next two weeks. They travel to No. 17 UW-Stevens Point next Saturday before a bout with defending national champion and No. 1 UW-Whitewater Oct. 18 at Carson Park.

“We take it one day at a time and get better,” Glaser said. “You can’t get used to losing. You’ve got to learn from it.”