Finding new life in the fall 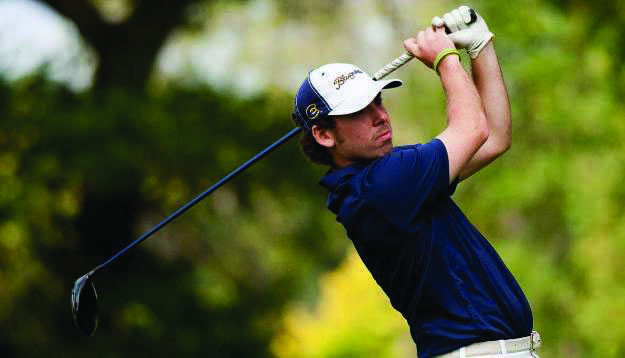 CALM, COOL AND COLLECTED: Sophomore Brady Hanson and the men’s golf team found their stroke this weekend. After two weeks of struggling, the Blugolds are in position to show the nation why they deserve a national tournament bid this spring.

A few times a year, a team comes to a critical junction in its season where they either grow as a unit or take a step back. The UW-Eau Claire men’s golf team arrived at their crossroads this past weekend.

Head coach Mike Greer said initially it looked as if the Blugolds mediocre play was set to continue. After their first day at the Gustavus Adolphus College Twin Cities Classic, Eau Claire was in 11th place, middle of the pack and still unsure of how to turn their game around.

In hopes of salvaging what was still a long weekend ahead, Greer gathered his golfers for a word.

“We had a really good team meeting the evening before the second round, and we readjusted our mindsets and focused on being patient,” Greer said.

After two weeks of what Greer called “disappointing golf” the Blugolds captured their opportunity to flip their season around by finishing in third place out of 19 teams.

Eau Claire moved up two positions to ninth after day two and then catapulted up the ranks in day three. The six-spot jump was the Blugolds largest one-day improvement of the year.

It would have been easy for any team to throw in the towel with the way the season has gone, but Greer said he was excited and proud of the demeanor they showed the final two days.

“This is a real resilient group,” Greer said. “I think they took to heart what we talked about going into the second and third rounds.”

Some things do not need to be said in order to be felt, and Greer said he sensed the importance of this past weekend, and he could tell his golfers did as well.

Sophomore Brady Hanson, who shot a 226, which tied him for 21st, said he and his teammates realized they needed to start having fun playing golf again, and if they did that, the scores would take care of themselves.

A recipe for some fun proved to be exactly what the Blugolds needed, and newcomer Patrick Conroy led the way.

He finished with a 223, tying him for eighth. Despite being new to the collegiate golf scene, the young golfer has made an immediate impact.

“Patrick is a grinder,” Greer said. “Regardless of what type of day he is having, he is going to battle until the last hole, and he has a spectacular short game.”

No coach expects their players to be perfect every rep, and Greer said at the end of the day, Conroy put together a solid score, and all he asks is that they stay mentally tough even when they are not playing to the best of their abilities.

Eau Claire has this week off, but teams with national championship aspirations don’t rest long. Greer said the team will be working tirelessly toward its final fall tournament at the Golfweek Invitational in Sandestin, Fla.

The confidence gained from the past weekend will help immensely heading into what Greer called a “top 20” tournament.

The field consists of the University of St. Thomas (Minn.) and Illinois Wesleyan. A top finish at a nationally recognized tournament like Golfweek will put the Blugolds in position to capture a NCAA tournament bid in the spring.

“We have some momentum coming off last weekend, and hopefully we can use that going into Florida,” Hanson said. “If we can play well there I can only imagine how much momentum we’ll have going into the spring.”