The bond that binds them

Senior golfer Kate Engler is preparing for a WIAC Championship repeat, while adjusting to life on the greens without her former head coach 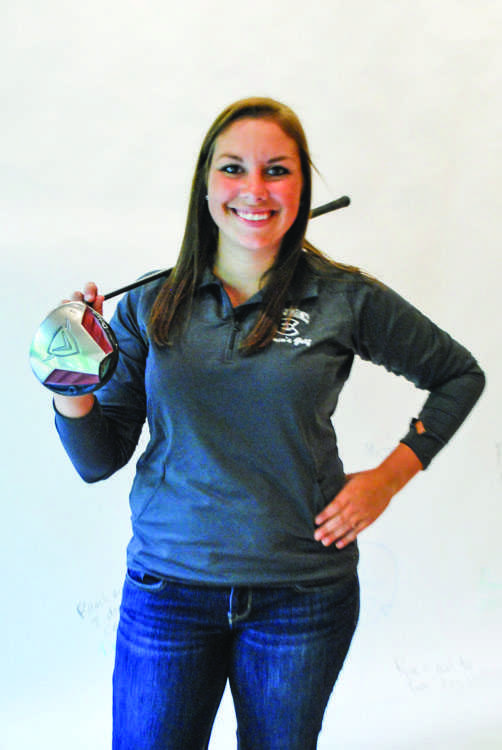 Senior Kate Engler was a freshman when the Blugolds traveled to Angola over two years ago.  Unsure of what to expect on the national stage, Engler carried herself in a manner that would later become one of the staples of her golf legacy at Eau Claire.

She quietly and confidently recorded the second best four-day score on the team behind her teammate and newly crowned national champion, Catherine Wagner.

Fast forward to the 2014 fall season, and the two-time All-American is poised to lead her team to consecutive WIAC championships.

Engler is thankful she made the right decision in coming to Eau Claire and for having the opportunity to play out her senior season.

She also credits her former coach, Megan Murphy (nee Sobotta) for elevating her game and said she would not be the golfer she is today without her guidance.

Coming out of high school, Engler was searching for a university with a winning creed. Her top choice was Eau Claire, and after reaching out to Murphy, who was the Blugold’s head coach at the time, she knew this was where she wanted to play collegiate golf.

Murphy, a graduate of Eau Claire and three-time All-American golfer said she saw the spark in Engler after her performance at nationals.

At some point after Engler’s freshman year, Murphy recalls a conversation she had with her future star athlete. The two were reminiscing on the national championship, and Murphy asked the young golfer if she realized she finished with the second best team score.

Engler gave her coach a look that to this day makes Murphy wonder if she realized how good her performance at nationals was at the time.

Murphy witnessed Engler blossom into a championship golfer and the bond between player and coach grew as well.

“It was really easy to relate to Megan,” Engler said. “When you get to a certain level, coaching can only go so far and it is more about the support or emotional side that gets you going.”

The reason for the two gelling together so well is obvious. Both are multiple time All-Americans, both are fierce competitors and both have learned valuable lessons from each other along their journey.

Murphy noticed as her perfection-seeking golfer kept pushing herself to improve. Her scores kept dropping. As a result, Engler and Murphy’s expectations for one another kept rising.

Often athletes will speak about the lessons their coaches teach them, but in rare cases exceptional competitors can teach their instructors lessons about themselves.

“Always knowing that you can be better,” Murphy said regarding the lessons Engler instilled in her. “And to be a team player, she truly wants her teammates to succeed.”

Engler and her teammates formed a bond with Murphy that extends past the fairways. This past summer, Murphy was married and several of her former golfers, including Engler, were in attendance.

The relationship the two share as friends is strong to this day Engler said. Which is why when she found out Murphy would not be returning to coach the 2014-15 season she was shaken.

“The whole team was really sad,” Engler said. “I was really affected by it.”

Despite her decision to step down from coaching, Murphy said she wishes her former golfers the best and she is always cheering for them.

In sports, much like in life, when adversity hits, there is little time to dwell on it. The show must go on, and this year Engler must adjust to her new coach, Mike Greer.

Greer, who has been the head of men’s golf for four years, said he has dedicated the first few weeks of practice to the important process of getting to know his new athletes.

Like her first impression on Murphy, Greer noticed the calm reigning WIAC Player of the Year was not going to be the one to bark at her teammates. Instead, Greer said Engler is exceptional at leading by example.

“Kate (Engler) is the complete package,” Greer said. “She’s a great ball striker, has fantastic short game and is capable of ‘holing’ a lot of putts.”

Adjusting to life on the course after Murphy has been challenging at times for Engler, but she said her new coach is a great guy and is extremely dedicated to the team.

Engler also said she respects the fact Greer understands some of the team is still dealing with Murphy leaving and he is very supportive of the process.

With over a month of in-season work already in the books, Engler, Greer and the other Blugold golfers are working tirelessly in preparation for the WIAC Championships.

If Eau Claire makes it to the national championship, it will be Engler’s last chance to follow in the footsteps of her former teammate by taking first at nationals.

She admitted the fairytale like book end to her career is something she has thought about, but the humble golfer said just playing better at nationals then she has in the past is her goal.