Change to fill the fall air 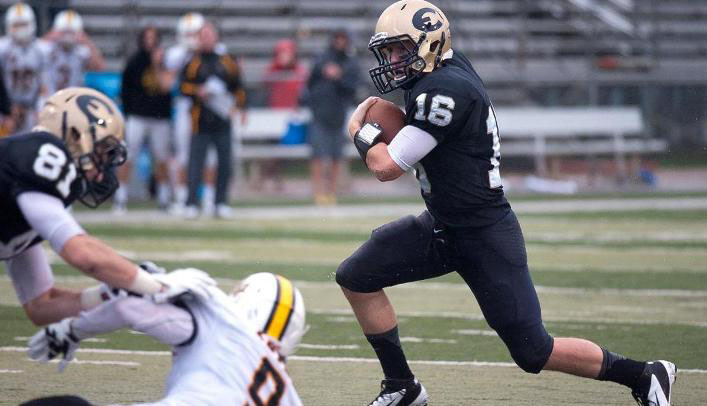 Every team starts a new season with a clean slate. Records refresh, new players fill the void of those lost to graduation and possibilities are endless.

The UW-Eau Claire football team, however, isn’t just erasing the chalk from last season. Instead, the Blugolds are going with an entirely different board.

Change is the name of the game for head coach Todd Glaser’s squad coming off an injury-ridden 2013 that ended with a 2-8 record.

But a new attitude and commitment to excellence has this batch of Blugolds optimistic about what’s in store for 2014.

“To be successful, we have to win games,” senior quarterback and captain Mark Munger said. “If we play sound football, limit our mistakes, we’re going to be a good, solid football team that can compete with anyone.”

To begin that process, the offense must adjust to life without the third all-time leading rusher in school history, Joel Sweeney.

Big No. 24, who was a four-year starter from 2010-2013 for Glaser, anchored the backfield and was the centerpiece of the offense in his time at Eau Claire.

The Blugolds ran a fairly traditional I-formation offense with the power back Sweeney getting most of the carries, but the offense will adjust accordingly to accommodate the more finesse running backs on this year’s roster.

Junior Clint Larsen is the team’s leading returner in terms of rushing yards as he racked up 228 yards and four touchdowns while filling in for an injured Sweeney in the middle of the season.

Fans at Carson Park will also see less shots down field in the passing game and more quick slants and screens to methodically move the ball up and down the field.

“You can do some things in the pass scheme, and it’s going to be a little bit different scheme than we’re used to,” Glaser said. “But they’re all fast kids and are good in open space, so we’re going to be trying to get the ball to them in open space to move the football that way.”

Munger, who tossed for 1,118 yards in eight games before brutally injuring his ankle a year ago, said the hopes of a short and quick passing game will open a hefty amount of yardage later in the drive.

“The defense can’t really get a rush on you, and they may not look pretty or fancy, but it will wear a defense down, then those big plays will pop,” he said.

Change is present on the other side of the football as well.

Out is former All-American linebacker Sean Graham and in is new defensive coordinator Sean Cummings, who played on the Blugolds NCAA tournament team in 2001.

He’ll look to work with one of the more athletic defenses in the WIAC as speed is the strength on that side of the football for the Blugolds.

“He brings a lot of energy and enthusiasm, and you see that in practice,” Glaser said. “He’s detail- oriented and putting his own stamp on the defense, and we’re excited to have him.”

The climb back to the top won’t be easy as five of the Blugolds first six games are against nationally ranked opponents, closing with a bout against defending national champion UW-Whitewater Oct. 18 at Carson Park.

But the philosophy is one day, one practice, one game and one moment at a time for Glaser’s youthful and athletic team. It will take its first test Saturday with a 1:10 p.m. kickoff at St. Thomas (Minn.) with the first home game a week later against St. John’s (Minn.) in a 6 p.m., under-the-lights kickoff.

“There’s a lot of change,” Glaser said. “But it’s going to be a lot of good change, and we’re excited about the enthusiasm to get people at Carson Park.”