Blugold men take down No.1 St. Olaf, move to No. 2 in the rankings 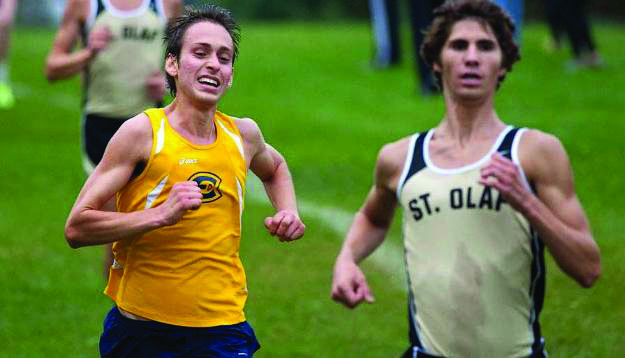 Sophomore transfer student from the University of Minnesota Josh Thorson placed second overall with a time of 24:56.2. This was Thorson’s first competitive race since transferring to Eau Claire.

“I think for a while at the U, I was overtrained and I was tired all the time,” Thorson said regarding why he transferred. “I think overall I’m feeling better day by day.”

On race day Thorson focused on running his own race, not focusing on the people in front of him or behind him. He stayed relaxed and saved the majority of his energy for the last leg of the race, to close in the gap between him and first place.

“Dan (Schwamberger), our coach made sure that we stayed relaxed those first two miles and made sure  that we were feeling good enough to run faster at the end,” Thorson said.  “It was pretty clear from his message that is what we were suppose to do.”

Top runner for the women’s team, junior Lucy Ramquist placed 17th with a time of 23:27.2. This was the team’s first time running this course.

“It allowed the seniors and upperclassmen to able to relate to the freshmen because they have never ran a 6k before and they’re brand new to the collegiate level racing,” Ramquist said.

The teams are now hard at work, training for the Blugold Invite next week Friday, one of their few home meets. Schwamberger runs his practices by splitting up the two weeks between meets. The first week is a harder training session, working the athletes and pushing their skills. The second week, before the meet, is an easier practice to prepare for the upcoming meet.

Schwamberger’s focus is to keep the team healthy and not overtrain them. The team focuses on listening to the coach and not doing its own workout.

“That is a big part of distance running, making sure you are not training so hard. That’s where we’re really paying attention to Dan’s training and not doing what we think is best but do what he thinks is best,” Thorson said. “Its best to just be patient right now.”