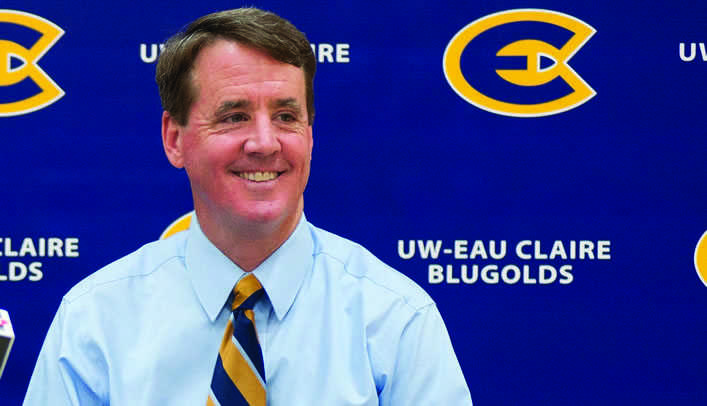 During his tenure as the head of the UW-Eau Claire athletics department, Director of athletics Scott Kilgallon has seen a lot of success.

Despite the trophies and accomplishments on the field, gym, court, ice or track, Kilgallon measures success by the experience of the student athlete not just in athletics but in the community and classroom as well as creating close relationships.

Kilgallon can be seen at almost every home event of all 22 Blugold sports, with his New England accent echoing throughout any venue. And he’s not just a figurehead there, he’ll stay, cheer and go to bat for every single one of the about 550 athletes who call the Eau Claire athletic department home.

“You’re in this profession for them, and I never lose sight of that,” Kilgallon said. “It makes you want to work harder and harder.”

In 2004, the then-Southern Vermont College director of athletics packed up his bags and moved to a place unfamiliar to him in Eau Claire.

Immediately, he had a vision and a concrete goal for his new athletic department: move up in the Director’s Cup standings, measuring the most successful collegiate athletics departments in each of the NCAA divisions through championships, records and standings in each sport.

And the only way to accomplish this, he said, was to give as close to equal attention as possible to every sport in the department, demanding excellence from all areas.

“I’m all about the student athlete and the experience, also, all about parody as best you can for all sports,” Kilgallon said. “You want to give it time to all 22 sports. I think that’s really, really important.”

His parody method worked, as the Eau Claire athletics department skyrocketed up the Director’s Cup list during his reign. Kilgallon entered the university when the teams combined to finish in 68th-place. In 2013, the Blugolds sat at 14th-place out of all NCAA Division III institutions.

His efforts didn’t go unnoticed by student athletes. Although Kilgallon said he can’t put a name to the face of every student athlete, he makes a conscious effort to protect the welfare of them.

“You hear people throw around the term player’s coach, well he was really a player’s athletic director,” junior football and track athlete Thurgood Dennis said. “He understood what it meant to be in our shoes, and not just as athletes, but as D III athletes.”

Dennis said he felt like he could always approach Kilgallon because he knew he’d be willing to listen. He said this was apparent the first time he met the calm and collected director of athletics.

“Scott always sounded so laid back — it might be because of his accent but his message was, ‘you guys are adults now and we’re gonna let you be adults, but if you ever do need anything feel free to come to us,’” Dennis said.

While Kilgallon strives to be a mentor to every student athlete as well as faculty members in the department, he was also the head of important decisions ranging from facility renovations to budget battles to even changing the culture of Blugold athletics.

One of Kilgallon’s goals, he said, was to create the ultimate package in a student athlete, focusing on athletics, academics and community outreach. His commitment to the goal saw the Blugolds become more active in the Eau Claire area as well as raising the student athlete GPA higher than the general student body.

But changing the culture didn’t just stop at molding role models for the university and Chippewa Valley region. It continued with his tireless efforts in generating money to benefit not only his department, but the university as a whole.

Kilgallon said most directors of athletics across the nation are able to take Mondays off, but for several years, he spent his Monday nights in front of the Eau Claire City Council, stepping into the batter’s box for the student athletes once more as he lobbied for a $6.8 million renovation of Hobbs Ice Center.

Eventually, the project was completed in 2010 and turned Hobbs Ice Center into one of the finest hockey venues in Division III.

“It’s been night and day to where our facilities were before and what they’ve become now,” current men’s hockey captain David Donnellan said. “We don’t realize the amount of time he puts in behind the scenes that makes our jobs easier to go out and play.”

And of course, Hobbs Ice Center plays host to the defending NCAA Division III national champion men’s hockey that Donnellan is a part of.

Although facilities don’t literally go out, recruit players, hire coaches and win games, Kilgallon said he thinks the renovation might have something to do with it.

“At the end of the day, you saw a private and public partnership, and coincidence, I don’t know, but we hired a great coach in Matt Loen and won a national championship,” Kilgallon said. “That’s what happens when people get together.”

Kilgallon made it a point of emphasis to create an environment within the department where everyone involved, including faculty, would put the student athletes first.

Head softball coach and Assistant Director of athletics Leslie Huntington said Kilgallon created a professional environment where everyone involved carried on the motto of Blugold excellence.

“We are very cohesive and all committed to the values of an intercollegiate athletic program at the Division III level – doing what’s right and best for our student athletes,” Huntington said.  “I appreciated Scott’s willingness to let our coaches coach their teams and his support of our overall goals and mission as a program and as a university.”

So what’s next for Kilgallon? Although he announced his retirement on Feb. 18 from Eau Claire, bigger institutions are actively pursuing him, and he intends to continue his work at one of them.

While he will undoubtedly face different challenges wherever he winds up, one thing will remain constant: his actions and decisions will only be made for the best interest of his student athletes.

“When you make decisions, you’re not always right, but I always think how this affects the student athletes,” he said. “You’re right 95 percent of the time when you let that guide you because that’s what you’re in this business for.”